After reading this paper, you will know: 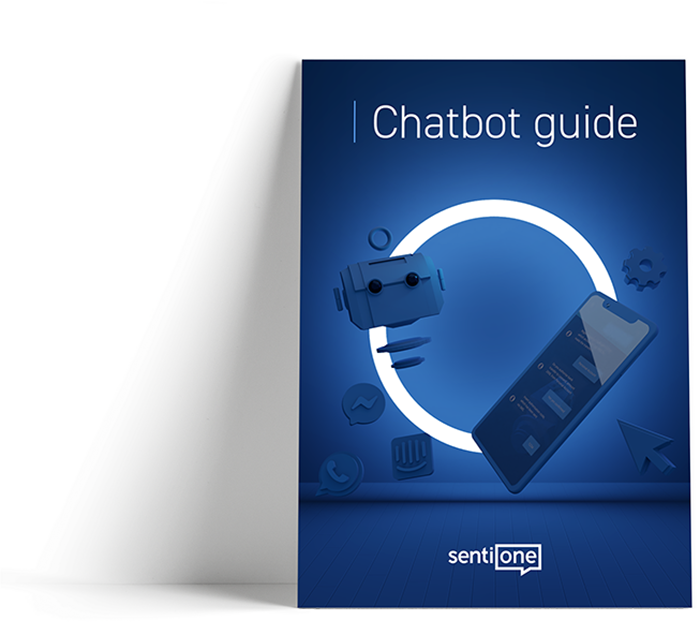 Chatbots and conversational AI are the new black. Well, not that new actually, but the excitement is reaching its peak. Everybody is talking about the absolute necessity of having a chatbot. Sometimes not necessarily knowing what for, why, and how.

Perhaps you’ve found yourself in this pace as well recently. Although, since you are reading these words, the odds are you are not willing to blindly follow the flock. You are clearly looking for some answers. You want to educate yourself before making a strategic decision to invest in conversational AI or even simple bots. Good for you. If you don’t know what exactly chatbots are and how to apply them to your business, read this guide.

What we tried to accomplish here is to explain AI in simple words. So that you can be sure you understand the basics of the CX automation solutions and decide for yourself if it’s worth the hype.

Chapter 1 What is a chatbot?

Chatbot is a software designed and developed to mimic human conversations through a computer or telephone. Chatbots can operate without direct human supervision, in voice or text channels through messaging apps, website chats, and call centre systems.

There are many different types of chatbots, depending on their purpose, communication channels, the level of advancement. For the most part, they are able to lead a conversation as per designed dialog flow to achieve set objectives like helping in day-to-day chores, answering simple questions (based on the internet research), collecting information, and many more.

“Chatbot is a computer program that replaces a human being in selected activities. Bots can be used, for example, to automate customer service processes. Thanks to automatic agents, customers can settle their affairs easier and faster, and companies can save time and costs redirecting people to more creative activities.”
Piotr Kempa, Bot Technology Expert, Founder @Primebot

Subscribe for more news from the world of chatbots

Get a monthly newsletter with AI applications in business

Chapter 2 What is conversational AI?

Conversational AI is the communication automation technology based on advanced robotic solutions. The term refers to the AI chatbots and assistants that are able to lead natural conversations with humans.

Usually based on natural language processing, AI chatbots can identify the intentions behind people’s statements and — using the learning data or online resources — estimate the best possible answer.

The main difference between conversational AI bots and simple chatbots, from the user’s point of view, is that you are not forced to use just predefined phrases that trigger their reactions, but can talk to them as you would to the humans and they will most probably understand you anyway.

“Although it has no ears, it can hear what you say; although it has no head (and brain), it understands; although it has no mouth, it can answer your questions. An AI bot is a computer program that can be enclosed in your phone, television, laptop, and even a toy. Some of them, when asked, can answer various questions like when your favorite cartoon is on the TV, when your mum will return from work, or how long it takes a spaceship to go to the Moon.”
Maciej Buś, Customer Experience Expert, CEO @My Customer World

Chapter 3 How do chatbots work?

Chatbots work on the basis of quite complicated algorithms set to find the meaning in a chosen sentence and then classify the intention to calculate the most suitable reply. The main purpose of the software is to relieve humans from repetitive labour, therefore chatbots are able to operate independently.

“A chatbot is a robot in the computer with which you can have a conversation. People must first teach him what to say and then he can help others in different situations. Thanks to this, you can talk to your computer or phone to report a failure, pay for shopping, or unlock the phone.”
Bartosz Ziółko, PhD, CEO @Techmo

The technology behind bots differs depending on their level and purpose. 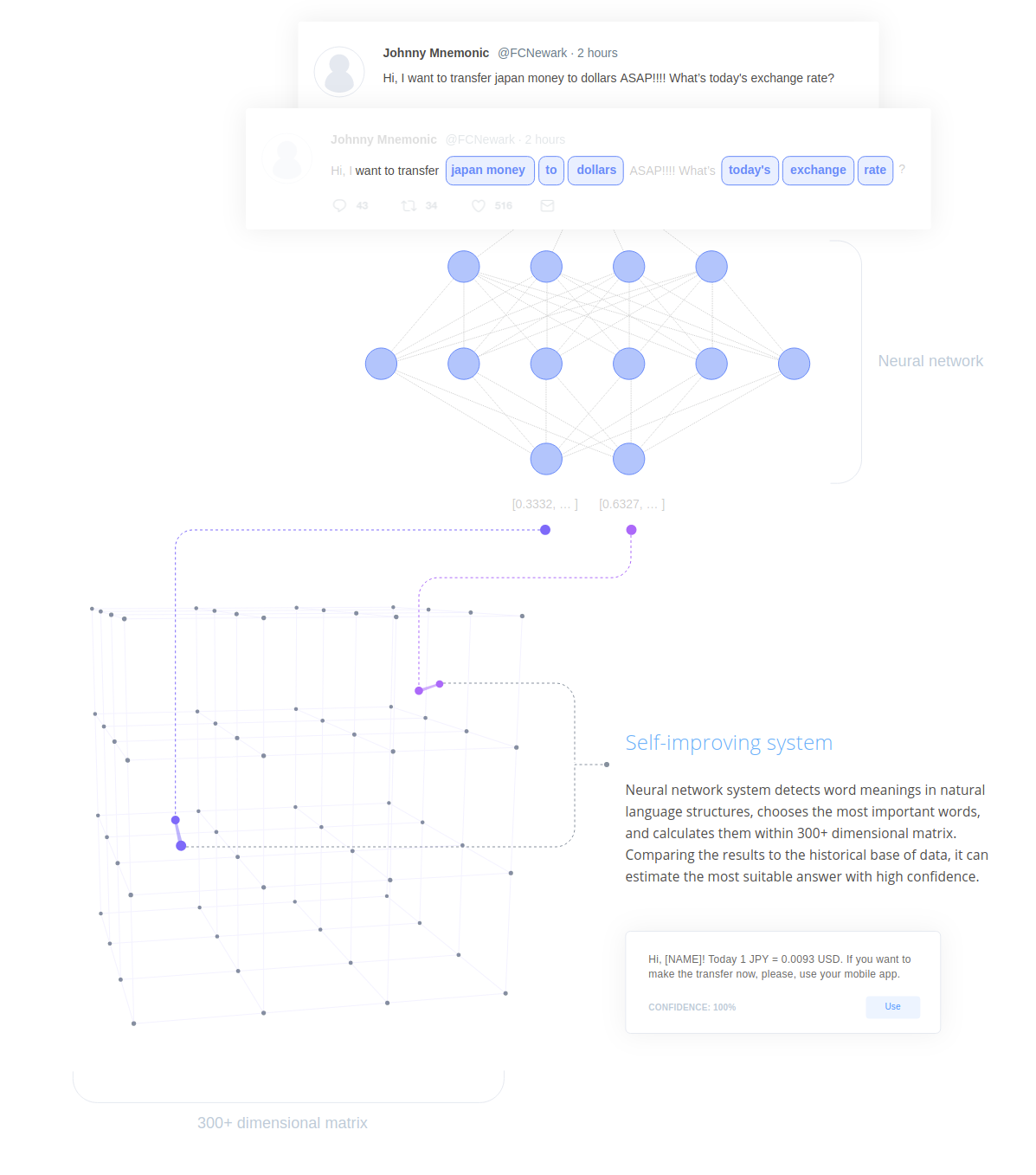 Every industry has its own buzzwords, three-letter enigmas, ciphers, and terms that need to be decrypted in order to know at least the basics. To lead educated conversation with people who are trying to sell you chatbots, make sure you know and understand these phrases.

Artificial Intelligence
a machine simulation of human thinking processes, especially learning, information research and acquisition, and logical reasoning.
ASR
Automated Speech Recognition, a technology used in voice-activated robotic systems allowing to recognise spoken language and translating it to text.
Chatbot
a software able to independently conduct a conversation in a given subject.
Customer Service Automation
the technology used to optimise time and costs of customer care processes.
Dialog Flow
all the possible paths that a conversation between a chatbot and a customer can take, including both customer’s statements and bot’s replies.
Intention Recognition
the process of finding the meaning of separate words and phrases in the context of a given dialog and possible processes serviced by a chatbot.
Machine Learning
an artificial intelligence technique based on certain patterns and statistical models, used to create a given analytical model that eventually leads to a computer performing an independent action.
NLP, NLU, NLG
Natural Language Processing, Natural Language Understanding, Natural Language Generation, software systems that transform free speech into structured data (and vice versa) allowing computers to identify the meaning of the statement.
TTS
Text-to-speech, speech synthesis, software designed to artificially emit sound in a form of human-like spoken language.
Virtual Assistant
Automated Personal Assistant, Intelligent Virtual Assistant (IVA), Intelligent Personal Assistant (IPA), a use of AI designed to relieve humans of certain processes and activities; the most known home assistants are Siri and Alexa, but in customer service industry a term referred to any chatbot working in the customer support field.
Voicebot
a bot working in voice channel, both in telephone conversations and via speech-recognition systems in messaging applications.

Chapter 5 The history of chatbots and conversational AI

The idea of cognitive machines is about a few decades old. It all started with Alan Turing and his “Imitation Game” which was a mathematical concept designed to create an algorithm clever enough to trick people so that they wouldn’t know if they play with a human or the machine.

Source: The History of Chatbots infographic by Futurism.com

Then a few “chatterbots” were developed.

Chapter 6 Why are chatbots important to your business?

Chatbots have officially came out of the academic world of experiments and the investigation stage. They became applicable in business and our day to day lives in one form or another.

Why do businesses invest in chatbots?

Let the numbers speak for themselves.

What benefits can chatbots bring to your business?

There’s much value in processes automation. What can you get thanks to chatbots?

Chatbots are important to your business because they’re the future of business in general. Everyone’s quoting the Oracle’s study which says that 80% of companies are willing to invest in AI by 2020. And that number — however incredible — is probably true. The one thing is that it shows the will, not the deed so keep calm and investigate your business case to apply the best form of AI to your business.

The state of the art in chatbot business changes rapidly. What was just fine last year may seem a bit dingdy to your clients today. So whatever you do, make sure you keep track of all the changes in the field.

There are many different types of chatbots and many applies for them depending on your industry, business goals, and — of course — budget.

Basic types of chatbots based on their purpose

Advanced chatbot solutions implemented at the biggest companies with the most complex processes need a custom approach. The AIaaS (AI as a Service) companies provide such solutions

The voicebot in phone channel is able to handle in 5 minutes conversations for which people need up to 38 hours!

Chapter 8 How can you use chatbots in business?

Possible roles for chatbots in your business are as numerous as your needs. Obviously, the chatbots working in today’s businesses are not too complex just yet but there are a lot of simple tasks you can give to your AI agents. Customer service metrics and KPIs you can improve with the help of AI and the number of companies going into that business lead to the simple conclusion that the investment simply pays off.

Most common use cases for chatbots

Your chatbots can do all of the above and so much more, depending on the level of advancement in the technology behind them. People are getting more and more creative with unconventional AI solutions. There are already first shops with all artificial assistants, content creating AI writers, even robotic conference hosts like Rysiek:

The spread of chatbots helps a lot of businesses, but doesn’t come without a bias. Hollywood has been feeding us more or less fortunate stories about AI for decades. There are a lot of misrepresentation in how movie-makers understand robots which has become a status quo when it comes to this topic.

Today’s companies are not facing just the challenge to make sure the AI will not get out of control and create chaos. Today, we need to paint a real picture of how the AI and robotic automation in business looks like for now. There are no humanoids walking around and joking with their mates or hurting people. Unless we tell them to.

So as long as we are in control (and it doesn’t seem like we’re going to lose it any time soon), we can do good with AI. Conversational AI is applied in many cases that we probably didn’t think of before, like helping the elderly.

There are also a lot of AI-related projects that help humankind, like crafting algorithms that spot human trafficking and other malicious behaviur on the web. This is what people do pro bono. And if you ever find yourself afraid of chatbots, remember there are still people behind the software.

Chapter 9 How to make a chatbot?

Getting started with chatbots and the AI technology may seem tricky but in fact it doesn’t really have to be that complicated. Most of the times you wouldn’t even need any special tch skills as there are people who can do all the IT work for you.

No matter if you are going to reach out to marketing agency for a simple Facebook chatbot which will cost you a couple of thousand dollars or are building a complex project and huge implementation spending hundred times more make sure you do the proper research and prepare or the project.

First of all, read our best practices of how to build a chatbot and not fail over a simple mistake. Think of it as any project and try to go through it with simple steps.

What to do when implementing a chatbot?

If you’ve read this far, you should already know there are many different types of chatbots, communication channels, use cases and benefits that come with the whole conversational AI. We hope this text made the whole world of AI more simple to you but if there are still some things that you’d like to discuss, ask along. We have truly amazing NLU engineers on board who really know their stuff so we will provide you all the answers you need.

We use cookies to provide best possible experience for our users. We hope you don't mind. OK