Elon Musk needs no introduction, and neither does Saturday Night Live. The show has a long-standing tradition of inviting guest hosts – so the news that the SpaceX and Tesla CEO would eventually be invited did not come as a surprise. Musk is no stranger to pop culture – having appeared in films such as Iron Man 2 and shows such as The Simpsons and South Park. It was only a matter of time before he’d be invited to SNL – it only made too much sense.

So, how did the show turn out? We dove deep into the social listening data gathered by SentiOne to find out. Join us as we analyse Musk’s go as the guest host of America’s favourite sketch comedy show!

We start like we always do – by looking at the basic analysis provided to us by SentiOne’s analysis view. You can take a look at the dashboard yourself here.

So, what can we see at first glance? Well, the reach and sentiment share seem to indicate Elon’s outing as the SNL host has gone rather well – just look at that Twitter reach! 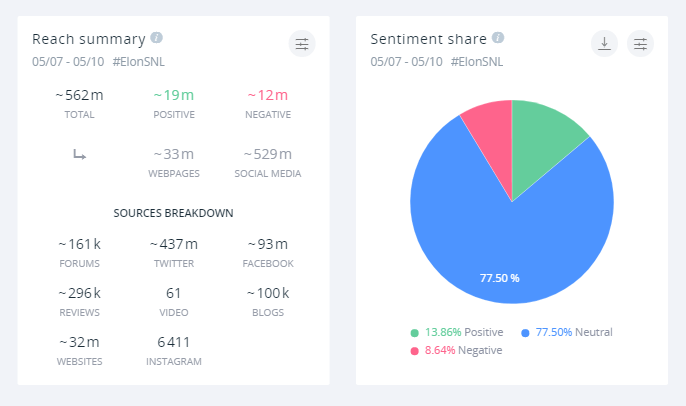 The sentiment share is also rather healthy – 13.86% positive mentions is nothing to scoff at. However, this sentiment analysis is not exactly as it may seem. We’ll talk about this later, though – let’s not get ahead of ourselves.

We can go deeper: we only need to take a look at the keyword cloud and the top hashtags associated with the mentions we captured. What do we see? 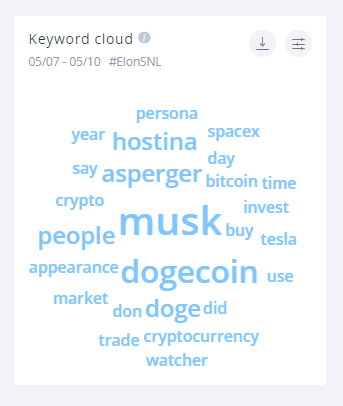 Dogecoin and Asperger’s – let’s take a deeper look at both of these topics.

If you happened to be following the cryptocurrency craze in the early 2010s, no doubt you heard of Dogecoin, one of the first meme-based “altcoins” – as in, alternatives to Bitcoin. Dogecoin emerged in late 2013 and for a brief while it enjoyed an engaged community on sites like Reddit.

The Doge enthusiasts were characterised primarily by their love for the absurd and positive: they did, for instance, use their combined meme-powers to raise enough funds to send the Jamaican bobsledding team to the 2014 Sochi Winter Olympics.

However, Dogecoin didn’t last – its value dropped to extremely low levels and it never enjoyed any widespread adoption. Even today, it is still considered something of a meme.

Which is precisely why Elon Musk gravitated to it in the first place. Remember the GameStop scandal from earlier this year? Reddit used their gains to pump up the price of Dogecoin – and Elon Musk encouraged the trend.

This continued throughout the year. Dogecoin has been a mainstay on Musk’s Twitter feed – which made some in the community convinced that Musk’s SNL appearance was going to boost the cryptocurrency’s price.

this is the funniest part of snl tonight pic.twitter.com/m5iBofzcpG

Dogecoin dropped heavily – this is in large part due to the critical response to the show, which we’ll talk about in a moment. Now, what was that about Asperger’s?

Elon Musk comes out as neurodivergent – but fumbles

One of the biggest discussion points of Musk’s SNL appearance was his candid admittance to being diagnosed with Asperger’s syndrome. This, unsurprisingly, has not gone over without comment.

Writing for Forbes, Nancy Doyle sums up the critique Musk has received for his statements. In short, Musk caused objections due to his past statements on autism and neurodivergence, while also exhibiting questionable business practices and advocating against social safety nets.

Criticism was also focused on his usage of the term “Asperger’s”. It was removed as a diagnosis from the DSM-V in 2013, partly due to new developments in psychiatry, and partly due to concerns about Hans Asperger’s Nazi past.

Finally, he also received criticism for claiming he is the first neurodivergent person to host SNL – which he demonstrably is not.

When Elon Musk claims he’s the first SNL host with Aspergers but he was not informed about Dan Aykroyd and Jerry Seinfeld pic.twitter.com/BPvYWmgPYv

Despite this criticism, Musk also received support for publicly speaking out about neurodivergence, helping boost awareness for autism and related conditions. While this is good, the usage of outdated terms can reinforce outdated and/or harmful stereotypes. In the immortal words of Uncle Ben, “with great power comes great responsibility”.

Online reactions to the sketches

The show’s reception was mixed to say the least. Hollywood Reporter was not enthused, as was Gothamist. Entertainment Weekly and the AV Club were more restrained in their recaps. But what did the internet have to say?

A lot of the skits were criticised, and none more so than “Gen Z hospital” which drew significant backlash for its appropriation of AAVE and presenting it as “Gen Z speak”.

This Gen Z hospital skit on SNL is so stupid. I’m so tired of nonblack people throwing random AAVE terms in their sentences and calling that horse shit “Gen Z language”. pic.twitter.com/3Qhu47zyqj

Cultural appropriation aside, the skit was also criticized for being entirely out of touch with what actual Gen Z are like.

There were bright spots, too – the “Chad on Mars” skit was commonly quoted as being the highlight of the evening.

The mixed reception of the episode reflects a broader trend we’ve seen in social listening data for Saturday Night Live. 12.98% of positive mentions to 10.05% negative isn’t a healthy ratio – especially since last year over 15% of all mentions were positive! 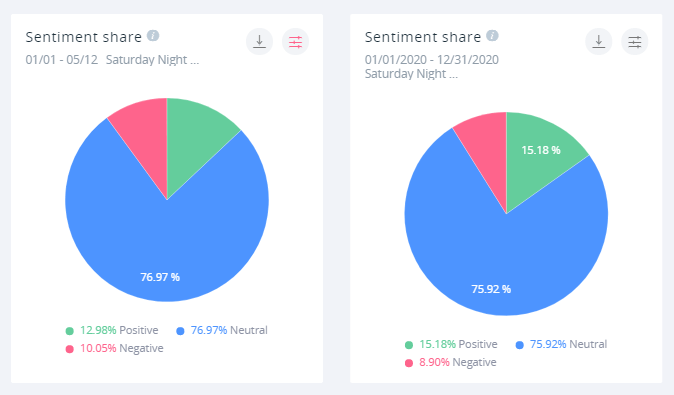 Overall, Musk’s appearance on SNL was a mixed bag.While there were some bright spots and great performances, they were brought down by some questionable writing choices.

The critical reception, however, is only one aspect of last Saturday night. The show was notable for how much discussion and engagement it generated – and how a single episode of a late-night variety show can tank a cryptocurrency.

All of the data used to create this article was captured using our flagship online monitoring solution, SentiOne. If you’d like to conduct your own social listening research into virtually any topic – from Elon Musk, through niche cryptocurrencies, to your very own brand – get in touch with us and set up your free trial period.