COVID-19 vaccines are finally here – we’re pushing towards an end to the pandemic. With this in mind, we decided to take a closer look at how various vaccinations are perceived by internet users. Is a particular vaccination more popular than the others? Do different countries perceive the same vaccination differently? Where are all of the discussions taking place?

As this is merely an exercise in social listening and not an in-depth scientific study, we have decided to limit the scope of our research. For each vaccine except two, we simply decided to put in its name as the primary tracked keyword while excluding the names of all other vaccines. Since the name “Sputnik” refers to various organisations, products and brands, we decided to narrow it down using the keywords “Sputnik Vaccine” and “Sputnik V”. For the SinoVac vaccine, we used both its proper name, “CoronaVac”, as well as alternative names: “Sinopharm” and “Sinovac”.

Each vaccine project also excludes any mentions containing the names of the other vaccines in order to not cross-contaminate our data.

Because our keywords are based on brand names, the results will be skewed: for instance, the CoronaVac tracking project does not use its Chinese name (克尔来福), by which it is most often referred to in Chinese media. The same applies to the Sputnik V vaccine (Спутник V), and vaccine names in alphabets other than English.

We set out to investigate three specific aspects of the COVID-19 vaccines: what caused the biggest spikes in each vaccine, whether the overall sentiment is positive or negative, and how different countries differ in their perception of each vaccine.

We were also on the lookout for any interesting anomalies that often pop up during online monitoring.

How did discussion about vaccines spread over time?

As you can see from the mentions in time graph pictured above, the discussion levels for each vaccine are all relatively stable – aside from the AstraZeneca vaccine, which had a blood clot scare (more on that in a moment). This single event dwarfs all other discussions.

This doesn’t mean other interesting discussions didn’t happen. For instance, the Pfizer vaccine started the year off strong, with news of then-President Elect Joe Biden receiving his first dose, as well as a widely publicised case of a 91-year-old man in Britain receiving his full vaccination. It also had a small spike in the middle of February: that’s when new reports about its full efficacy started being released. This coincided with Pfizer announcing it would be increasing its production volume.

Let’s address the elephant in the room: the Oxford-AstraZeneca vaccine is definitely taking the throne as the most discussed vaccine. The reason for that? An extremely rare side effect: blood clotting. During the second week of March, several European countries suspended vaccinations using the AstraZeneca vaccine due to reports of blood clots.

It has to be stressed: this is an extremely rare side effect. In over nine million Europeans who received the AstraZeneca shot, only 44 cases of clotting have been identified.

Despite the risk being minimal and leading agencies around the world reassuring the public that the AstraZeneca shot is safe (EMA, WHO), continuous reporting on the topic by the media has led to a continuous discussion over perceived safety issues with the vaccine.

This has catapulted AstraZeneca to the top position purely by mention count. That’s not necessarily a good thing though – 12.47% of all AstraZeneca mentions are negative.

The vast majority of the discussion took place on Facebook – let’s look at it closer, then. The sentiment share on Facebook alone reflects the overall ratio of negative-to-positive mentions: 12.41% to 11.91% 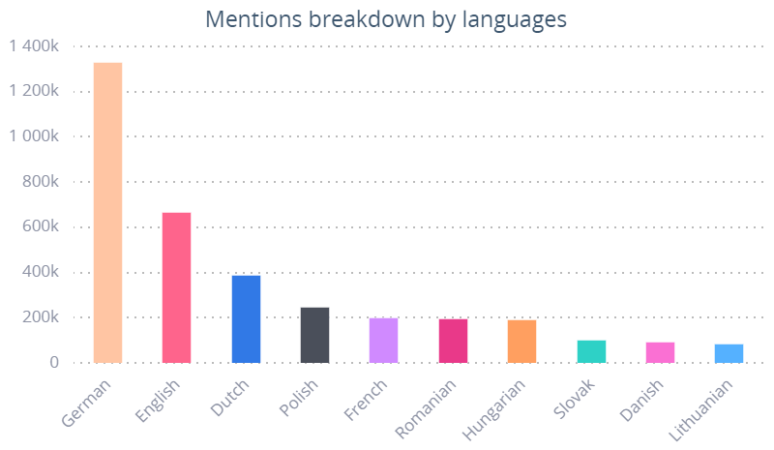 The vast majority of mentions have been made in German – Germany is, after all, one of the first countries in which the blood clotting issue was discovered. An interesting anomaly occurs, however, when we take a look at the top posters on Facebook – the top spots are claimed by French dailies Le Figaro and Le Monde. The first German source, the online news site Der Spiegel, is trailing behind in sixth place.

Pfizer – a hit in Europe!

Compared to AstraZeneca, every other vaccine might seem boring and tame. Look at Pfizer – it only had three modest spikes in mentions. We already described two of them earlier in the study. The third took place towards the end of March, and it was caused by a variety of factors: the announcement of its effectiveness being proven on young adolescents, as well as it being discovered that the vaccine also protects against the South African variant of the coronavirus. 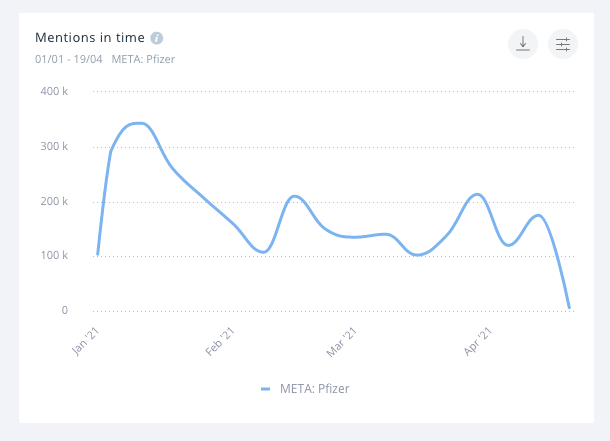 The Pfizer vaccine is extremely popular in Europe. In fact, Hungary is the country that most often discusses this particular vaccine – it generated almost twice as many mentions as the United States of America (in fourth place, behind Poland and Germany). 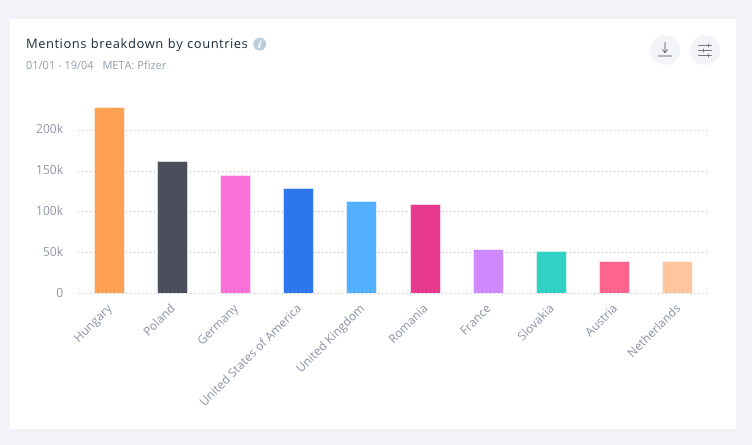 The Moderna vaccine followed a similar trajectory to Pfizer. It too had three spikes in mentions – two in January and one in mid-March. The first two were caused by its approval by the EU and arrival on the market as the second COVID-19 vaccine (following Pfizer), as well as its insufficient performance with regards to the South African strain of the virus. The third was caused by Moderna starting to test the vaccine on children between the ages of six months and twelve years.

Despite these spikes, Moderna is the least discussed of the “Big Three” vaccines. In our research, it only generated just over one million mentions. 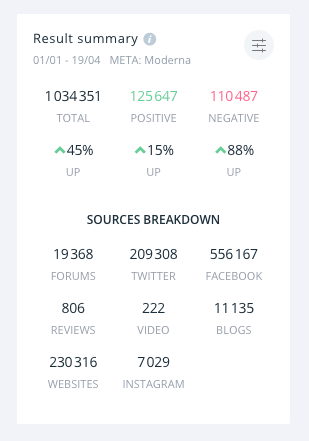 Considering the search parameters we settled on, the poor performance of the Sputnik vaccine is not a surprise. The only significant spikes in discussions happened in February and the first week of April.

The first spike was caused by the Russian government donating 300 million doses to African countries. The second – by an unfortunate coincidence. Argentinian president Alberto Fernández tested positive for coronavirus – two months after receiving the Sputnik V vaccine. The ongoing political debate in the EU over the Sputnik V vaccine also helped to boost the spike into anomaly territory.

The Johnson & Johnson brand isn’t particularly well known for its pharmaceutical research. Internet commentators were quick to point out their distrust for the brand after traumatic experiences from childhood.

Despite this, the vaccine has been enjoying a healthy degree of discussion, with 669,389 mentions being generated since January 1st. The biggest spike occurred last week (as of the time of writing), when almost 60 thousand mentions were generated on April 13rd. The reason? Another blood clot incident. Various countries around the world decided to delay the vaccination in order to fully investigate the risks of adverse effects caused by the vaccine – the same story as with the AstraZeneca vaccine.

Every vaccine is discussed heavily online – with a heavy emphasis on social media. Using SentiOne, we can easily pinpoint who the opinion leaders are. 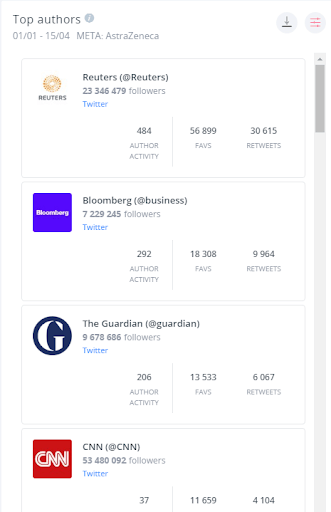 Unsurprisingly, media organizations are where the most engagement is centered. Their constant reporting on new vaccine developments is what drives the discourse on social media. News coverage of the vaccines overshadows even the World Health Organisation, which – in the case of the AstraZeneca vaccine – is nestled in 13th place, between Time magazine and the AFP News Agency.

This trend is consistent across every vaccine we’ve taken a look at: AstraZeneca, Pfizer, Moderna, Johnson&Johnson, Sinovac and Sputnik-V. In some cases, outliers break through – for instance, this single tweet by Elon Musk managed to catapult him to the 23rd place in engagement, easily blowing past organizations like National Geographic and CBS News.

Probably J&J, but BioNtech & Moderna are good too. Some debate imo as to whether a second synthetic mRNA shot is really needed, but the first is a no-brainer.

Which countries prefer which vaccine?

Our meta-analysis tried to be as language-agnostic as possible: with one exception. Instead of using the keyword “Sputnik”, we had to fall back to using “Sputnik-V” and “Sputnik vaccine” in order to not cross-contaminate the results with mentions of other entities with that name, such as the Russian state-owned news agency.

As such, we expected the results to be slightly skewed towards the English language and anglophone countries in general. We were pleasantly surprised to discover that this was not the case: as you can see, the AstraZeneca vaccine is most often discussed in Germany, with the United States not even in the top 10. 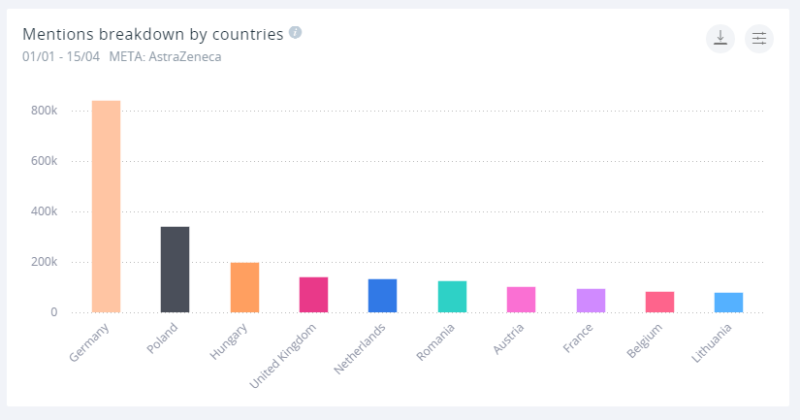 This is understandable – after all, last month Germany paused its AstraZeneca vaccinations in order to investigate the blood clotting issue. How do we explain the massive popularity of the Pfizer vaccine in Hungary?

Hungary, after all, has a wide variety of vaccines available: Pfizer, AstraZeneca, Sputnik, Sinovac…

And what of the “eastern” vaccines? Due to various embargoes and international deals, both the Sputnik and Sinopharm vaccines aren’t generally available in “the west”. Shall we see where they’re most often discussed? 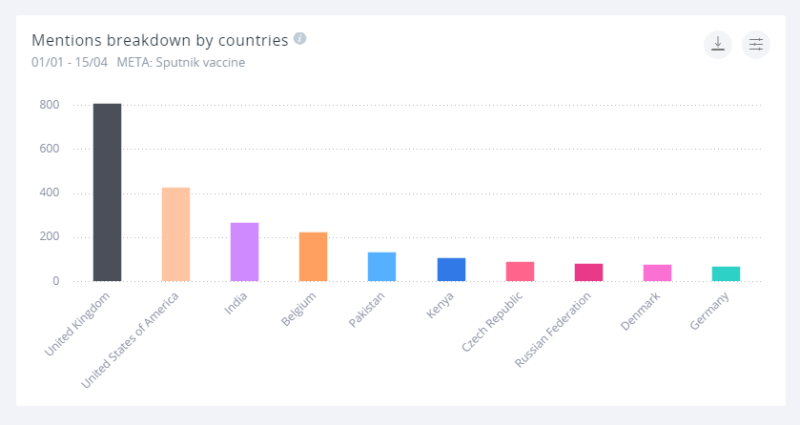 Despite their general unavailability in the west, the Chinese and Russian vaccines still find plenty of discussion around the world – in English, at least.

Of note is also the trend we notice in the top social media profiles discussing each of these vaccines. Western news agencies are joined in by Indian and Nigerian press outlets in the case of the Sputnik Vaccine, while Sinovac is also – unsurprisingly – discussed by Asian outlets.

As you can see, social media monitoring can be an effective research tool. By analysing over 10 millions online mentions we were able to draw solid conclusions regarding each vaccination. Useful social media monitoring features like anomaly detection allowed us to spot unusual spikes in discussions, while the countries breakdown function presented how discussion spread out internationally. If you wish to analyse your own topic, social trend, or your brand – give us a shout and we will help you set up your SentiOne account.