The Rise of Skywalker – a marketing perspective

It’s that time again – for quite some time now, the holiday season meant a new Star Wars film releasing in cinemas to a ravenous fanbase. Although many critics are worried that Disney is oversaturating the fanbase with new additions to the franchise, Star Wars continues to bring in massive profits for the company. Clearly, it’s still a relevant media franchise.

Unfortunately, the last mainline entry in the series, The Last Jedi, was met with a mixed reception. Although critics universally agreed it was a worthy addition to the franchise, audience scores reported on platforms such as Metacritic and Rotten Tomatoes were much more lukewarm. Some have attributed the discrepancy to politically-motivated vote manipulation (a practice known as review bombing), while others simply put the weight on not meeting fan expectations.

Whatever the case may be, because of the backlash The Last Jedi is now remembered as a black sheep in the franchise; even more so than the much-maligned prequel trilogy, now fondly remembered for their so-bad-they’re-good dialogues. The new film, The Rise of Skywalker, then, not only needs to stand on its own merits – it also needs to win back the fans turned off by The Last Jedi.

Let’s forget that ever happened, shall we?

Although understated, one of the most important elements of the marketing campaign leading up to the film was distancing the film from The Last Jedi. This included a much-publicised return of J.J. Abrams as the director, as well as the inclusion of many references to past films in the franchise within the marketing materials. Unlike previous films in the franchise, though, the marketing campaign did not discuss much of the plot, likely to prevent fans judging the film preemptively.

On a surface level, this makes sense – the last film was too much of a departure from the franchise, so directing attention to call-backs and references to established elements of the series is an obvious move.

On the whole, though, the marketing for the film was severely understated compared to previous entries in the franchise: although trailers were released to usual fanfare, the campaign limited itself to those, short statements made by cast and crew in interviews, and, curiously, a tie-in with Fortnite, one of the most popular video games on the planet. Compared to the lavish affairs that were the marketing campaigns for the previous two films, this was a subdued campaign. Disney was banking on fans generating the buzz and hype on their own. 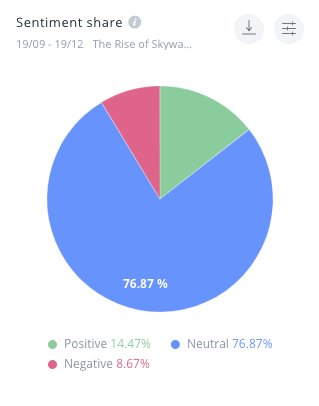 Despite the rather lukewarm reception to the film itself (we’ll come to that in a minute), this sentiment still holds: at the time of writing, the score has barely changed. 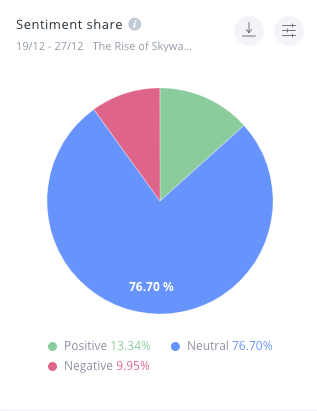 The Critics Strike Back

The film, however, was met with a very lukewarm critical reception. The first signs of trouble appeared just before the premiere, when the first critical reviews appeared. One particularly scathing piece called the film a “colossal waste of imagination”. As the film opened, a critical consensus quickly formed: despite the movie being a visual treat, it recycled much of the plot and failed to reach a satisfying conclusion. Additionally, criticism was pointed at the excessive use of nostalgia and references to previous films, which many critics felt would alienate more casual fans of the franchise. The film is currently the second lowest scored Star Wars instalment on Rotten Tomatoes, with a 55% critic score.

The rather lukewarm reception was also reflected in box office results – the film grossed around $373.5 million worldwide, well below its $450 million projection.

The Rise of Skywalker was also marred with controversy leading up to its release. The team behind the film made a point of mentioning the first on-screen same-sex kiss in the franchise in interviews leading up to the release. This was denounced by the LGBT community as queerbaiting – the practice of presenting token characters in order to appease the community. These concerns would prove to be true, as the scene in question featured two background extras which only appear in a single shot, a shot which was cut out of the film in regions such as the United Arab Emirates and Singapore.

Another controversy concerned the treatment of Kelly Marie Tran, who portrays the character Rose Tico. Following the release of the previous film in the franchise, in which Tran played a significant role, the actress was subjected to a sustained, racially-charged harassment campaign. This continued for several months, eventually leading the actress to leave social media for good.

As The Rise of Skywalker neared release, details began emerging that Rose Tico’s role in the film would be drastically cut down; in all, despite being the lead in the previous instalment, Rose Tico appeared on-screen for seventy-six seconds of the almost two-and-a-half-hour long film. This, too, was met with outrage from critics and fans alike, who accused Disney of “caving in” to the demands of the harassers.

So what went wrong? A combination of many factors:

Ultimately, The Rise of Skywalker failed because it didn’t improve on the other films in the franchise; it was further disadvantaged by an understated marketing campaign which failed to address lasting concerns expressed by the fanbase.

The conclusion to draw is simple: pandering to your fanbase’s nostalgia can only take you so far; your film needs to stand on its own merits, especially in a franchise as big as Star Wars. What’s more, even colossal media franchises need marketing and can’t sustain themselves only on hype from dedicated fans. Mass appeal means catering to casual fans and newcomers as much as the fandom; Disney seemingly forgot this important lesson, and we can all see the effects of that.