Welcome to the monthly SentiOne social media digest – can you believe July’s already over? The second half of 2021 certainly started with a bang! As usual, we have carefully selected the topics that shook the social media landscape in the last month. From spyware scandals, through the video game industry developments to billionaires failing to reach space – we’ve got it all.

All of the social media data used to compile this digest comes from our flagship social listening solution, SentiOne. The data used is available for your own perusal in our interactive dashboards: just click on each topic to view them within SentiOne – no account required!

As usual, if you’d like to catch up on the previous digests, here are the editions for June, May, April, March, and February.

This month, we learned that journalists, activists and lawyers all across the world have been targeted by various authoritarian governments using a single spyware tool.

This tool, Pegasus, is available to any “vetted government” with enough money to do business with its developer, the Israeli NSO Group. It targets smartphones and until the leaks came to light, it was virtually undetectable. Once installed on a device, it can pull data such as text messages and contacts, as well as activate microphones and cameras remotely.

The leaks consist of a list of phone numbers of intended targets for the software. Among them was the phone number of Cecilio Pineda Birto, a Mexican journalist assassinated in 2017. In all, over 50,000 targets appeared on the list – mostly journalists, lawyers, activists and political figures.

The story gained a lot of traction on social media. In just over a week, posts relating to it managed to gather over one and a half billion impressions. 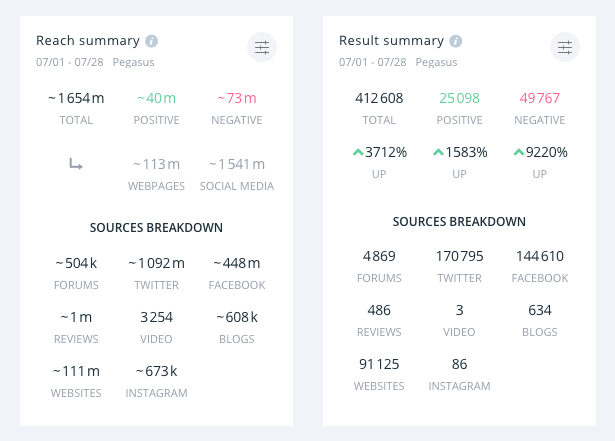 Thanks to the scandal, the company behind the Pegasus Spyware, NSO Group, has had its first major exposure in the public eye. 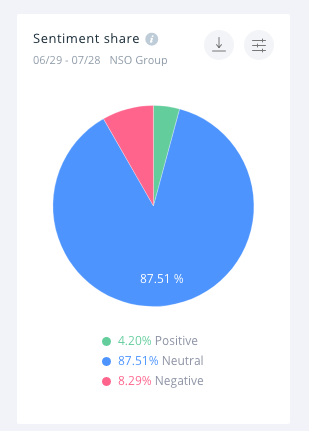 Many prominent voices took to social media to voice their opinions on the scandal. Chief among them was Edward Snowden, whose 2013 disclosures uncovered how the United States government leverages social media and new technologies to spy on its citizens. Snowden called for an universal ban on the manufacture and sales of such software:

If we don’t do anything to stop the sale of this technology, it’s not just going to be 50,000 targets: It’s going to be 50 million targets, and it’s going to happen much more quickly than any of us expect.

The “Switch Pro” is announced, just not by Nintendo

The Nintendo Switch is one of the most successful gaming devices of recent years. Released in 2017, the console is still going strong in its fourth year, with a wealth of titles released each week.

Despite this success, however, fans have been craving a new model or an upgrade to the system for quite some time now. Compared to its primary competition, the PlayStation 4 and the Xbox One, the Switch was rather underpowered – multi-platform titles frequently have less graphical fidelity on the platform. This discrepancy is even more pronounced now that the next generation of consoles, the PlayStation 5 and the Xbox Series X, has arrived.

(Thus, rumours of a “Switch Pro” began circulating. This isn’t a new thing – in fact, posts about the Switch Pro have been making the rounds as early as August 2018, possibly even before that!

(Due to limitations imposed on us by social media platforms, we unfortunately can’t go back further than three years back)

The rumours gained critical mass before this year’s E3 conference – and, according to the rumours, it was then that Nintendo would unveil the new Nintendo Switch. This didn’t happen, as their conference focused exclusively on the games. The reveal came a bit later – although…

…Nintendo was not interested in upgrading the Switch hardware whatsoever. The new model that was announced was a minimal upgrade at best, featuring a better screen, improved speakers and a LAN port built into the console’s dock. No increased graphical capabilities at all. The new model >won’t even address the dreaded Joy-Con drift issue!

Needless to say, the reaction of both the press and fans was mixed, to say the least. As you can see on the sentiment share chart, the new Switch announcement is polarizing to say the least: 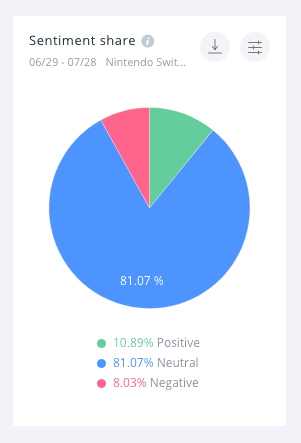 The disappointment didn’t last long, however. Valve, the company behind Steam, the de facto kings of PC gaming revealed their new release not long after: the Steam Deck. It is, essentially, a mid-range gaming PC sitting comfortably in a Switch-like form factor. This is, for all intents and purposes, a Switch Pro. Talk about good timing and capitalizing on a market demand! 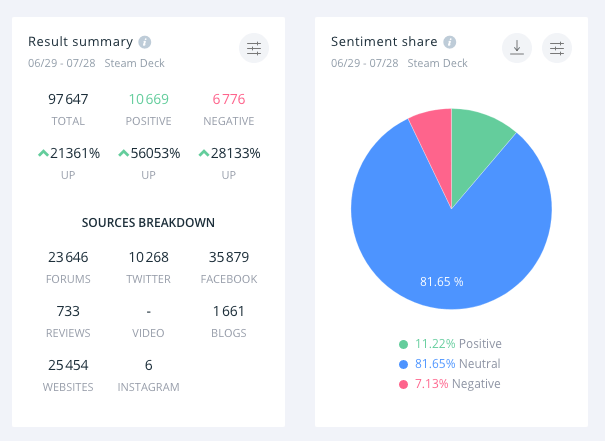 “The billionaire space race” is in full swing, as both Richard Branson and Jeff Bezos spent July playing astronauts. Both Virgin Galactic and Blue Origin conducted flights with their CEOs on board, managing to garner some media attention, but also heavy voices of criticism.

While both companies enjoyed attention, it’s clear Jeff Bezos took the victory, both in social media buzz and actual spaceflight achievements. Of the two, it was Bezos who got closer to space (106 kilometres vs Branson’s 86) – but neither of them can actually call themselves astronauts, according to revised FAA rules.

It’s also worth noting that the media reporting around both Bezos and Branson spread a bit of space misinformation, by claiming that both men crossed “the edge of space”. This term is highly contested: while some refer to the Kármán Line as the border between the Earth’s atmosphere and outer space, it is not universally accepted. In fact, several national space agencies are still debating on how exactly we should define the border between the Earth and the rest of space.

The two have also faced criticism for engaging in what are essentially pointless vanity projects with no benefit to society at large. Bezos in particular drew heavy amounts of flak for his tactless comments after his flight, in which he thanked Amazon employees – who are subjected to endless exploitation – for “making his flight possible”.

Personally – and I don’t inject my opinions here very often – I find it ridiculous that we’re celebrating two of the richest men in the world failing to do what Yuri Gagarin did sixty years ago on a fraction of their budget and with extremely primitive technology. Call me when they manage to complete an orbit.

At least we got some memes out of it.

Congrats to Jeff Bezos on his successful rocket launch. And also for totally not overcompensating for something pic.twitter.com/fI3OMxiaVQ

To close things off this month, we have an odd story from the Tokyo Olympics, which recently kicked off amidst protests and criticism. It all started with a tweet:

Beds to be installed in Tokyo Olympic Village will be made of cardboard, this is aimed at avoiding intimacy among athletes

Beds will be able to withstand the weight of a single person to avoid situations beyond sports.

I see no problem for distance runners,even 4 of us can do😂 pic.twitter.com/J45wlxgtSo

The Olympic Games have a reputation for its competitors engaging in a lot of the dirty fandango in the Village. During the 2016 Olympics in Rio, the athletes were supplied with 450,000 condoms – that’s 42 condoms per participant!

Social media denizens were quick to point out the futility of the cardboard bed:

I wonder if the most physically gifted people on the planet can figure out how to have sex standing up pic.twitter.com/9PS0sPJFfI

This was before the athletes took it upon themselves to prove that you can, in fact, fit multiple people on one of the purported anti-sex beds:

“Anti-sex” beds at the Olympics pic.twitter.com/2jnFm6mKcB

Social media had a field day with these beds before the truth was finally revealed: they are made out of cardboard solely so they can be recycled later. This was a decision made in order to keep the Olympics sustainable, and not to prevent athletes from taking impromptu trips to pound town.

The memes, however, will always stay with us.

First look at anti-sex beds that will be used at the Olympics pic.twitter.com/35alyIN0jQ

To finish off, a rather serious story. Activision-Blizzard, one of the largest video game publishers on the market, has been sued by the California Department of Fair Employment and Housing. The suit alleges sexual abuses and misconduct going back years, with truly horrific incidents being referenced (content warnings for sexual abuse, rape and suicide apply). 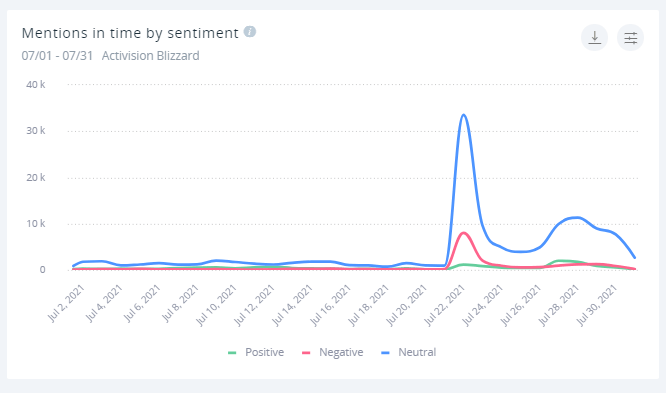 Activision-Blizzard is the publisher behind some of gaming’s most beloved franchises, such as Call of Duty, Overwatch, and WarCraft. These allegations, and the tone-deaf response of the company’s higher-ups tanked its reputation. Compare these two sentiment share charts: the one on the left is from before the lawsuit was announced, the second one is from afterwards. 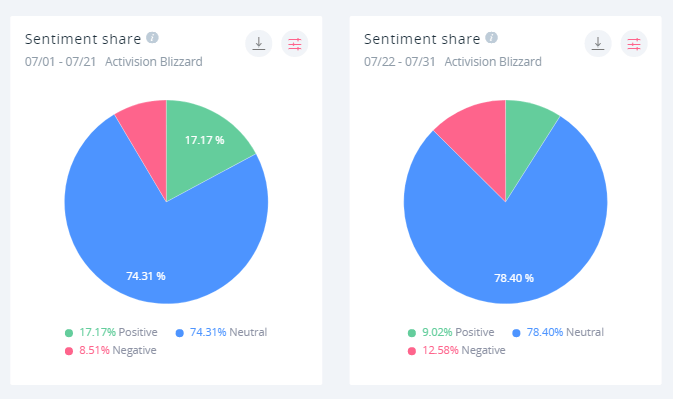 The scandal also made workers at the company protest. Activision-Blizzard wasn’t known for treating their employees well, even before this lawsuit (in 2019, they fired 800 employees despite record-breaking profits) – and this crisis seems to have been the final straw. A strike was organized under the hashtag #actiblizzwalkout and from what we can see, social media supported the move. 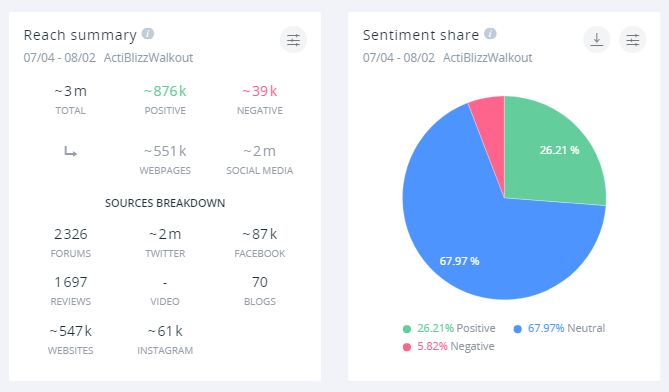 Agnieszka Uba on
All

The Rise of Skywalker – a marketing perspective