Hello and welcome to the monthly SentiOne Social Media Digest! June was one hell of a month – and we have a fresh roundup of all the hottest topics, trends, and anomalies, ready for your reading pleasure!

As usual, you can find the previous digests right here: February, March, April, May.

In case you’re a newcomer to this series, we prepare our digests using our flagship social listening solution, SentiOne. It allows us to compile interactive analysis dashboards containing the data we used to compile our summaries below – and we’re sharing these dashboards. If you’d like to take a look at the data yourself, simply click on each heading to be taken to the SentiOne app.

For over two decades now June has been recognised as the LGBTQ+ Pride Month, commemorating the 1969 Stonewall riots. This event is now considered to be the initial spark for the modern queer liberation movement. Pride month, then, is a celebration of all things and people LGBTQ+, as well as a recognition of the contributions queer people bring to society.

In recent years, large brands have gotten in on the celebrations, prominently displaying messages of support for the LGBTQ+ community on their social media channels, websites, and advertisements.

This year, the conversation about Pride Month is centered around products. Even our own SentiOne shows that a lot of the top mentions for the key phrase come from celebrities and brands pushing products. The post that garnered the most attention throughout June belongs to Katy Perry: she was promoting a rainbow-themed shoe. 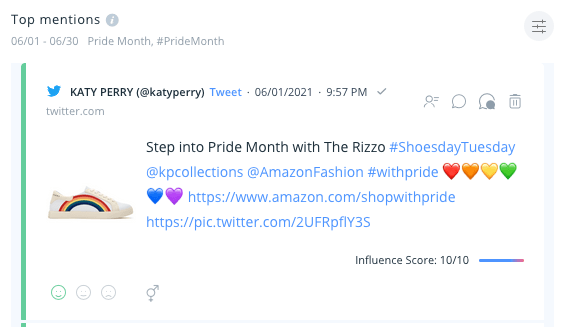 This disingenuous appropriation of queer culture for profit has a name – “rainbow capitalism” – and activists are heavily pushing back against it.

This pushback included pointing out the hypocrisy of several brands that put up rainbow logos, but only in countries where it is “safe” to do so. In regions where LGBTQ+ people still face constant discrimination and even violence, these brands remain silent.

No brand has failed more than Coca-Cola, though. Their custom pride bottle campaign backfired spectacularly after it was discovered that terms such as “LGBT”, “Gay Pride” or “Transgender” were blacklisted from being put on bottles, while hate speech went through without an issue. The Twitter thread below demonstrates how broken the campaign was, but beware: slurs are displayed prominently (to prove a point)

I love corporate pride!!!
Corporations are my friends!!! pic.twitter.com/WH4I2X6nnD

You wouldn’t know any of this if you simply looked at the raw social listening data, however. The deluge of corporate-sponsored content successfully drowned out any dissenting voices. During Pride Month, after all, it is more important to hear the voices of our corporate friends, rather than those of actual queer people.

In a year where LGBTQ+ rights are under constant attack – even in “the west” – this is especially egregious. 2021 is the year in which more than 100 anti-trans bills were introduced in the United States, but you won’t hear a peep about that from any of the corporations, who often sponsor the politicians behind those bills.

This is why activist groups, such as Reclaim Pride NYC have sprung up. Their goal is to provide alternative Pride events to those sponsored by the state authorities and corporations. These marches and parades are explicitly banning any corporate or state presence, and focus specifically on real issues facing the queer community still.

If you cast your mind back to earlier this month, you may recall a morning when the internet stopped working. There was nothing wrong with your router, either – it’s just some (most) websites that seemed to stop working. What happened?

A single company went down, and that took half the internet with it.

Let’s back up. Fastly operates a Content Delivery Network (CDN) – essentially, a network of servers all around the world that companies can use to deliver their websites to users around the world faster. By hosting a website at different points around the world, customers from different countries can access them at equal speeds. This also helps balance website load and prevent having a single point of failure – if a CDN server goes down, users are simply redirected to another one.

But what happens when an entire CDN collapses? 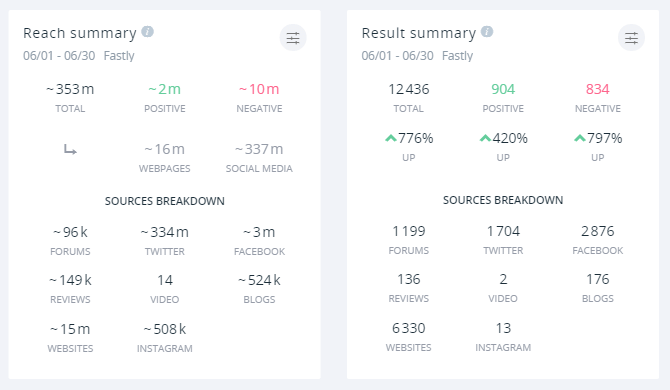 Well, we saw that earlier in June. Wide swathes of the internet go down. The problem with Fastly is that a lot of high profile websites used it as its primary CDN. We’re talking about giants like Amazon, CNN, Reddit, Spotify, et cetera – they all relied on Fastly. When Fastly went down, so did they.

Just logging on to the internet, a decentralised network of computers that should theoretically have no single points of failure. Now to take a big swig of water and check out my favourite websites, The Guardian, the New York Times and Amazon.

Fastly managed to fix the issue in time, but their reputation took a large hit – especially after it was revealed that the outage was caused by a single user submitting a configuration file.

As you can see below, the positive-to-negative sentiment ratio isn’t great. In fact, it’s almost 1:1! 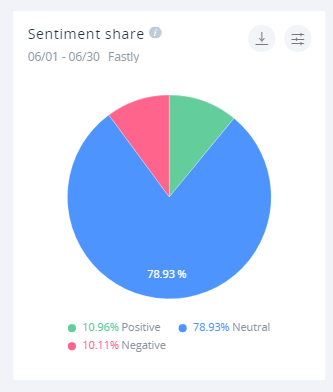 Take heed, then – the lesson to learn here is that relying on a single CDN provider is not the greatest of ideas, lest you end up like the Verge. They had to continue reporting to their readers through a shared Google Docs file!

No, the heading is not a typo – we know it’s 2021. Whether UEFA does is another matter.

We jest, of course. Last year’s European Football Championship was called off due to the COVID-19 pandemic. We’re making up for lost time, now that conditions are marginally safer.

We decided on something a little different this year. Can social listening tell us which match was the most popular thus far?

Every match played has its own hashtag created by UEFA. For instance, all official posts about the England-Germany game were tagged #ENGGER. Fans also adopted these hashtags and used them to share their own thoughts about the game.

So we did the only rational thing: we created a separate project for every single match hashtag thus far and plugged them all into a comparison analysis. Which game had the most people talking about it?

For both buzz and reach, the Germany-Hungary standoff on June 23rd (2-2, in case you missed it) took the top spot. 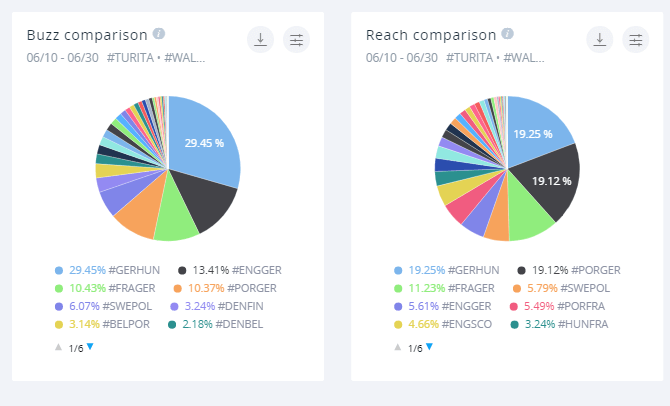 Back on the broader #Euro2020 front, we also took a look at the usual suspects. The peak day mentions-wise was June 23rd. Aside from the mentioned Germany-Hungary standoff, that day also featured Poland getting knocked out of the tournament by Sweden (3-2), Slovakia suffering a humiliating defeat by Spain (0-5, with two own goals), and France drawing 2-2 with Portugal.

The top mention on the #Euro2020 hashtag belonged to Polish captain and star player Robert Lewandowski, who thanked his fans for their support of the national team. 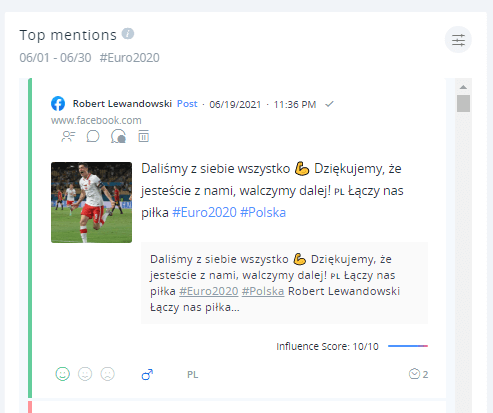