Once again, it is our great pleasure to invite you to our monthly social media digest! Herein you will find the biggest trends, spikes and talking points that shook social media over the last month.

As usual, each topic has its own SentiOne dashboard – just click the heading to view all the data we used while writing this digest.

The AstraZeneca COVID-19 vaccine did not have a particularly smooth rollout. An extremely rare blood clotting side-effect was detected last month, causing several countries to halt inoculations while the issue was investigated.

This caused widespread distrust of the vaccine. The AstraZeneca shot was debated hotly in March – and this trend continued well into this month. We wrote about the various vaccines and their perception on social media earlier this month – take a look! 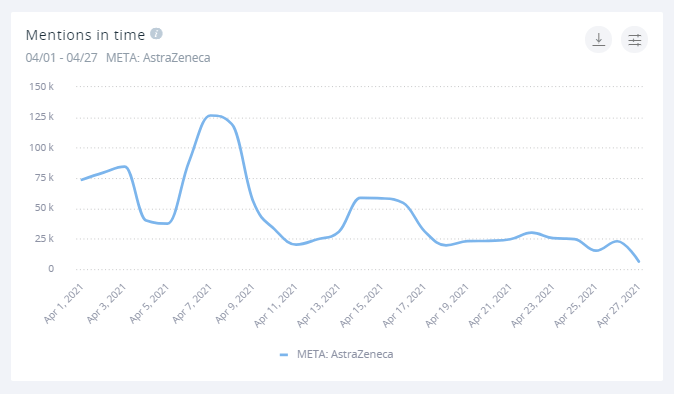 The discussion was primarily driven by Facebook and news sites. This is reflected in our Top Authors widget – the most influential profiles and sites posting information about the AstraZeneca vaccine belonged to news sites. The first non-news profile comes in at sixth place – that of Ľuboš Blaha, a member of the Slovak parliament. 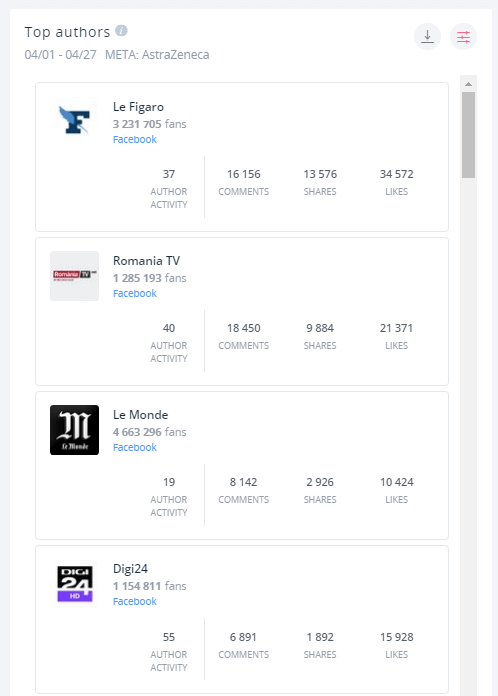 The Oscars – wait, there were films released this year?

It might be hard to remember these days, but at one point, films were released to the public in these giant buildings called “cinemas”. We would sit there in the dark, eat extremely overpriced popcorn and stare with righteous anger at the person in front of us, whose head would somehow cover most of the screen.

This was in the Before Times. These days, most of us watch new film releases on streaming services, from the comfort and safety of our homes. As such, new releases somewhat lost their “big event” status. It’s no longer a grand occasion to see an anticipated film premiere in a packed theater – these days, this mental image is more likely to cause distress than nostalgia.

Which explains why some of us got caught off-guard by the 93rd Academy Awards this past weekend. Did they even make any movies last year? Apparently so.

The event itself was a mixed bag. BBC’s Nicholas Barber was particularly critical towards the way the event was conducted. Mentions-wise, we didn’t do much talking about the oscars: SentiOne detected under 200,000 mentions this year. 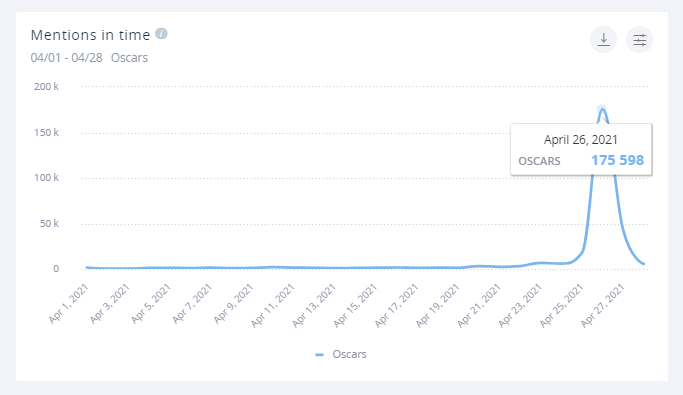 Compare this to last year, where we easily captured half a million mentions: 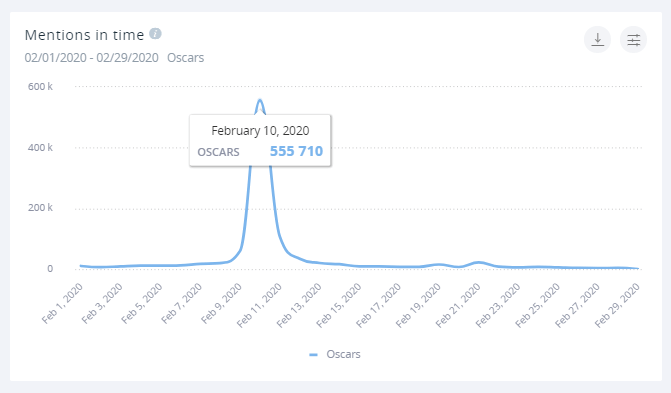 The lack of interest or awareness extended to some of the films nominated. For instance, did you know there was a live-action Pinocchio movie released last year? No? Don’t worry – neither did anyone. He’s here now, though, and he will never leave. He will always be with you. He will watch you sleep.

my therapist: the live action pinocchio can’t hurt you

April was also a turbulent month for football fans – association football, that is, not American. A “Super League” consisting only of Europe’s biggest football clubs was rumoured to be in the works for a long time – and it was finally announced this month. The reception was, shall we say, less than stellar.

The idea was simple: take twenty of the best football clubs in Europe and pit them against each other in a league of their own. This competition would be an alternative – or, according to some, a replacement – to the UEFA Champions’ League.

The problem was with the nature of the league itself. Football enthusiasts and professionals alike criticised the league for it’s tone-deafness. Critics pointed out that the ESL would be an idea that nobody wants: a breakaway competition, to which only those with enough money would be invited.

The reactions in the professional football world have been equally negative: both FIFA and UEFA, football’s biggest administrative bodies have threatened the participating clubs with expulsion from their domestic leagues.

Even various governments stepped in. French president Emmanuel Macron declared his support for UEFA’s stance, as did leaders (and the opposition!) in Britain, Spain and Italy.

Even clubs eyed as potential league members by the nascent ESL condemned the idea: Bayern Munich, Borussia Dortmund, and Paris Saint-Germain all publicly rejected their invitations.

The opposition was built on a simple principle: football was always meant to stay united and accessible to all – and creating a league restricted only to the richest of the rich goes against that very idea.

Below you can see an overview of some of the most influential and critical voices in this heated debate. 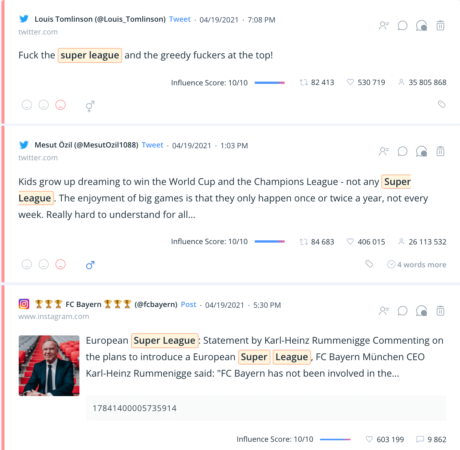 Our results don’t leave much room for doubt – one of the most important people in the whole affair is football journalist Fabrizio Romano, whose name dominates both our keyword cloud and the top authors widget. His reporting had the biggest reach – and for good reason! 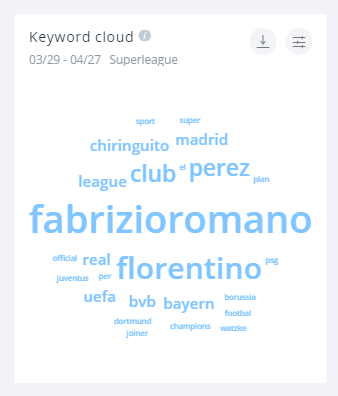 One year ago, a man named Josh had an idea. Feverishly, he added every single Josh he could find on Facebook to a single, massive group text. 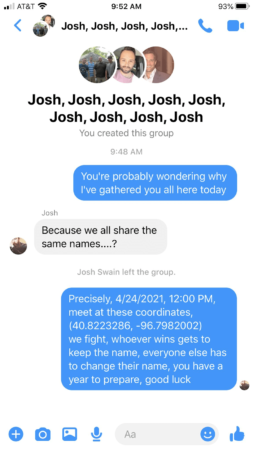 This epic battle royale was promptly imagined by social media users, chuckled at, and forgotten about. We can see it in the data: the mentions for the name “Josh” didn’t spike – it was simply another silly little internet thing.

But not for the Joshes.

No, the Joshes took the matter with the utmost seriousness. They didn’t forget. They prepared. They organised. And last weekend, the utter madmen did it.

In a Nebraska field, they met and fought. A battle of truly epic proportions ensued and continued on for hours, until one man stood victorious: a four year old boy, affectionately nicknamed “Little Josh”.

#JoshFight, as it came to be known, became one of the biggest online events in April. Its sheer absurdity catapulted it far into the social media stratosphere – it was widely discussed, with an impressive reach of 15 million on its peak day!

…and that’s it for this month’s social media digest! We’re constantly tinkering and fine-tuning our online monitoring radars to never miss a trend, blip, or anomaly. We hope you enjoy our forays into recreational social listening as much as we do – and we’ll see you in a month!

Elon Musk’s Twitter Takeover — What You Need to Know 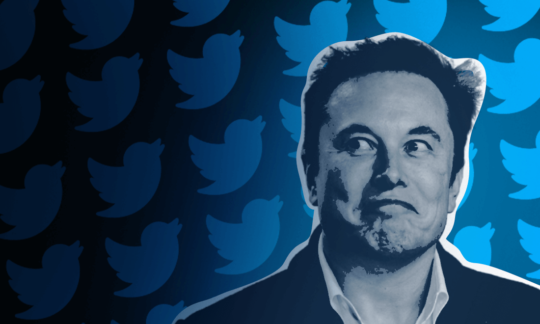 Mathilda Hartnell on
All

How not to create disappointing chatbots? 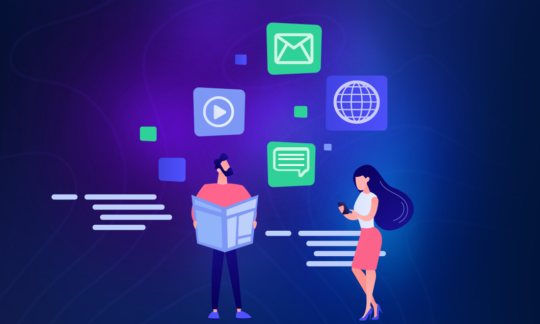