Another month, another digest! This time, we had it all – from bombshell interviews, through a long-awaited film premiere, all the way to a single boat casually grinding world trade to a halt.

Starting this month, we’ll also share the analytics dashboards we created for each topic – just click on each heading to be taken to the SentiOne app. Don’t worry – you don’t need an account to browse the dashboards!

Early on in the month, the Duke of Sussex and his wife, Meghan Markle gave an interview to Oprah Winfrey, the American broadcasting legend. They spoke openly about their life within the royal family and how they were treated both by the media and other royals.

The interview was notable for many reasons, not least the accusations of racism and abuse received by Markle from the British press and members of the house of Windsor. During the week of its broadcast, it has been one of the most discussed topics, peaking at 846,110 mentions on March 8th. 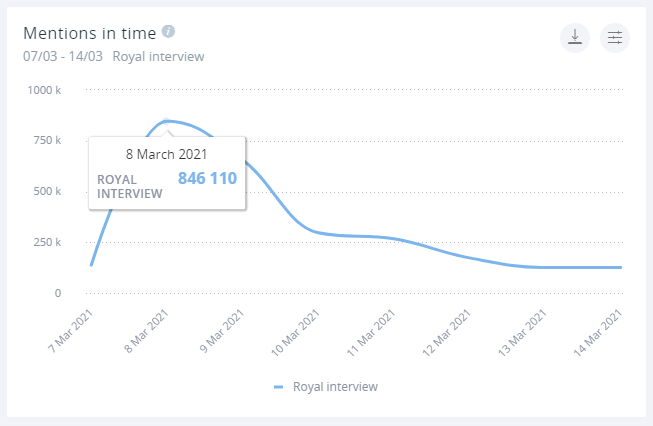 The discussions around the topic ranged from sensible questions such as “why is there even a monarchy still in the twenty-first century”, to comments about Piers Morgan being called out for years of abusive comments towards Markle, to dozens and dozens of memes being made using screenshots from the interview.

The reception to the interview proved divisive: according to our sentiment analysis algorithm, positive and negative comments are neck-in-neck: 11.18% and 11.75% respectively. 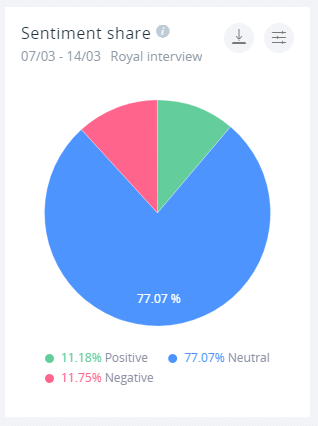 We realise a lot of you might be rightfully exhausted of superheroes – it’s not a rare phenomenon at this point. It seems like most of the last decade was dominated by the Marvel Cinematic Universe and related superhero media that tried to get a piece of the pie.

None more so than the DC Extended Universe. Ever since its debut with 2013’s Man of Steel, the series has been criticised for its “grimdark” and uneven tone, poor casting decisions (Jared Leto??? As the Joker?????) and its seeming attempts to “rush” a cinematic universe without giving it the proper buildup.

This culminated in 2017’s Justice League, DC’s answer to 2012’s blockbuster hit, Avengers. Not only did the film go through an extremely troubled production cycle, with director Zack Snyder leaving before post-production began, it was also very poorly received, receiving a measly 40% on Rotten Tomatoes.

Soon after the film’s release, a grassroots fan campaign emerged: #ReleaseTheSnyderCut. Ultimately, most criticisms of the film were aimed at changes made by the new director, Joss Whedon (who also directed Avengers).

The campaign was in the background, but started gaining momentum in 2019, thanks to both fan efforts and support from Snyder himself. This culminated in May 2020, when it was announced that the “Snyder Cut” would come to HBO Max. 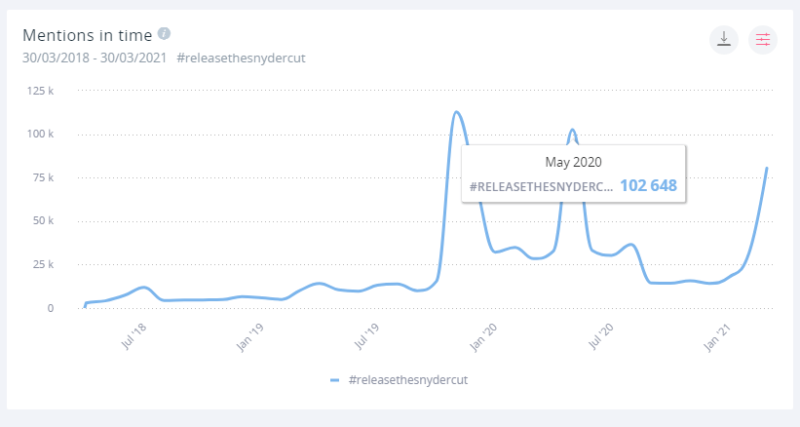 The four-and-a-half-hour beast of a film finally released on March 18th. How did the internet react? 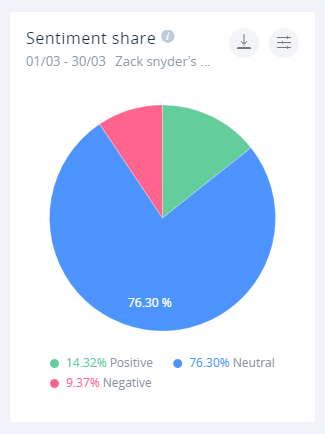 Overall, the release was rated positively – definitely an improvement on the theatrical version. Most criticism was centered on the runtime.

What matters most about the Snyder cut, however, is the simple fact that it wouldn’t even exist, were it not for the tenacity with which the fans fought for its release. Never doubt the power of social media again!

The Suez Canal gets hilariously blocked by a boat

For six days, world commerce has ground to a standstill. Global capitalism remained on the precipice of collapse. Europe was facing a catastrophic supply shortage. We watched Mad Max on repeat to get ready to live in the oncoming post-apocalyptic reality.

What caused this state of affairs? Was it war? Was it the imminent climate disaster? Was it a giant meteor from outer space?

No. A boat got stuck in the Suez Canal.

The Suez Canal is an extremely important shipping route – it is what ships use to get from the Indian Ocean to the North Atlantic without having to go around Africa. This saves an incredible amount of time and fuel, and as a result, it is one of, if not the most important trade routes in the world.

On March 23rd, the giant container ship Ever Given has completely blocked the canal by running aground – seemingly, due to strong winds, although there is a possibility of human error. The ship’s bow impacted and then got itself stuck in the canal’s bank. Hilarity ensued.

There’s having a shit day, and having the kind of day where you jam your ship sideways into the Suez Canal

As the efforts to free the ship increased, social media became captivated with the story of one boat being responsible for almost collapsing global trade. It is estimated that the blockage cost around $9.6 billion dollars every single day.

That didn’t matter, though. What really mattered was the adorable little digger that did its best to free the colossal ship.

just to reiterate: about 10 percent of world trade has been at a standstill for 2 days because a cargo ship drew a giant dick in the Red Sea then wedged itself sideways in the Suez Canalhttps://t.co/hlN1PcmMhW pic.twitter.com/wfSKdrtpkj

All of us watched the situation with bated breath and steadily increasing incredulity. Who among us hasn’t suspected that either the ship’s captain or helmsman weren’t entirely in possession of their senses? Of course all of us did: the topic has been shared over a billion times, the bulk of it on Twitter (865 388 retweets). 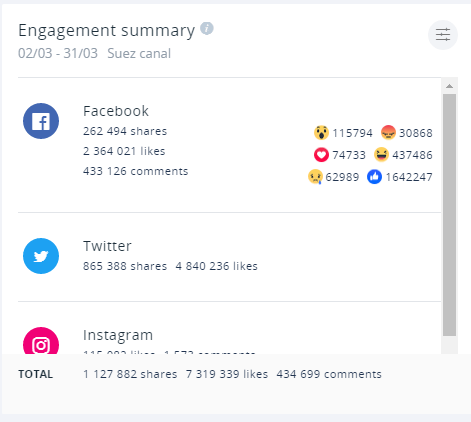 Eventually, the ship was refloated, and following an inspection to ensure the Suez Canal didn’t sustain permanent damage that could endanger more ships, it was opened for trade again. The internet’s response?

SuitSupply the most tone-deaf marketing campaign of the year

We’re going to end on a much more niche subject, one that only garnered a little over two thousand mentions in SentiOne. It does, however, deserve putting SuitSupply on blast – they released what is likely the most tone-deaf marketing campaign of the year!

It all started on March 4th, when the menswear clothing brand SuitSupply launched their new ad campaign, “The New Normal”. It wasn’t received well, to say the least. Unfortunately, we can’t actually present any images from the campaign – they are simply too NFSW for our blog.

The reception in professional media has been mixed. From a scathing review in Esquire which pointed out the company’s problematic past, to a more reserved take in AdAge, the campaign certainly made waves – but possibly not in the way the company wanted.

As for the results, well… SuitSupply’s brand reach in the week following the campaign’s launch isn’t looking too hot. A result of two million is barely a blip in the grand scheme of things. The positive/negative sentiment ratio also leaves a lot to be desired. 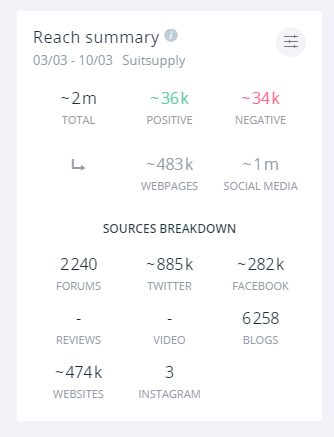 Ultimately, what sank the campaign is the tone-deafness of it all. We spent an entire year social distancing ourselves and taking precautions not to spread our germs everywhere. The intent was to use the extreme contrast of pure hedonism to drive conversation, but that just seems to have fizzled out entirely by the end of the week.

They shot their shot and missed. C’est la vie! 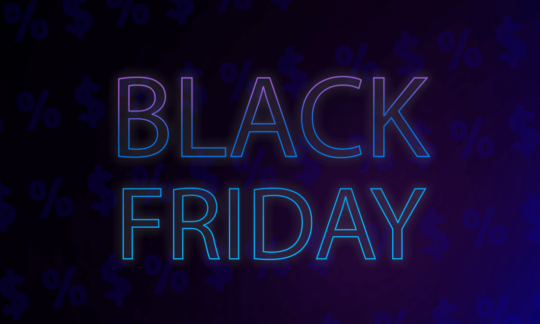 The Weight Gainers and Their Friends – a Powderful Case Study

Eszter Vida on
All

2019 on Social Media: a SentiOne Retrospective