Well, it’s official. Facebook – the company, not the platform – is changing its name to Meta, to “better reflect” its new ventures. These include increased forays into VR and its “Horizon” metaverse project, which is… ambitious, but confusing.

Predictably, this drew a strong social media reaction, which we monitored using our state-of-the-art social listening tool. Before we get to the data, however, let’s get some context.

Why “Meta”? What’s a metaverse?

The name “Meta” was chosen to reflect Facebook’s growing interest in building a “metaverse”. What’s that, you may ask? The Metaverse is a concept introduced by Neal Stephenson in his 1992 cyberpunk novel “Snow Crash”, in which it is a virtual world running across a global computer network. If you saw (or read) “Ready Player One”, you know the drill. You interact with a simulated world-space through an avatar, instead of clicking on links on a flat page with your mouse.

This is not a great concept for many reasons. While Facebook – sorry, Meta – promises its “metaverse” to be a unified place to work, play, and socialize, there are many technical hurdles to overcome.

Setting those aside, the-artists-formerly-known-as-Facebook are not enjoying a lot of public trust, which will seriously impact the reception of Horizon, whenever it launches. Let us not forget the Cambridge Analytica scandal, which irreversibly damaged our perception of social media. What’s more, recent leaks by a Facebook insider demonstrated that Facebook knowingly engages in boosting hateful content and misinformation, because it “generates engagement”.

You can see the issue.

“Wait, this sounds oddly familiar…” – the only Metaverse that matters

If you were online around fifteen years ago, you might recall a little project called Second Life.

Second Life is, to date, the closest we ever got to a true metaverse. Launched in 2003, it quickly garnered media attention for being the first successful project of this type. It achieved a respectably “player” base, and allowed users unparalleled freedom to create experiences and content in the virtual world. 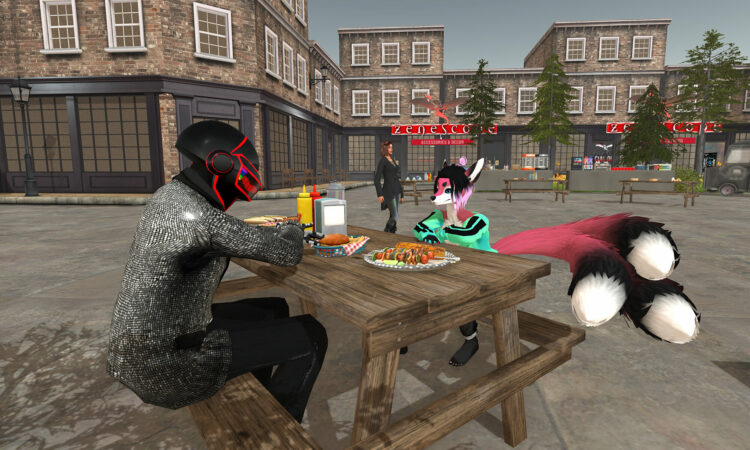 The success drew in companies to promote themselves through Second Life. Although marketing your product or brand in Second Life would never reach as large an audience as, say, a television commercial, some still took the plunge. For a moment, you could find MTV and Coca-Cola billboards in all the prime locations in Second Life… but the residents universally hated them. Other initiatives, such as real-world newspaper offices in Second Life, or university classrooms, were received more warmly.

The “problem”, as was quickly determined, was that people didn’t log onto Second Life to interact with brands – they logged on to explore their creativity, hang out with friends, and have lots and lots of virtual sex. Whatever your opinion on the matter is, you can’t deny the simple fact: it’s these activities that keep Second Life going to this day.

This is where Facebook’s metaverse is most likely to fail. Facebook is known for not handling adult content very well, to the point of imperfectly banning it outright from its platforms. What’s more, the company has been caught red-handed boosting far-right content and conspiracy theories to drive engagement metrics.

If Meta and its Horizon project are managed with the same principles that drive Facebook, then the end result will be a desolate wasteland, full of failed marketing campaigns and hate speech.

Horizon is not the only metaverse project on the market. Epic Games, makers of the ever-popular Fortnite, are also looking to turn their game into a full-blown virtual world. Their offering is already positioning itself as a more open, less restrictive alternative to whatever Meta will release to market.

Epic, however, faces its own criticism – from inappropriately trying to depict historical events in their game, to cozying up to cryptocurrency pyramid schemes. Their attempts to turn Fortnite into what it is – a fun video game – have always fallen flat on their face. Remember when the last Star Wars film (in itself a failure) decided to hide away a major reveal in the game, rather than the film? Yeah.

Both companies, however, are going to face the same challenge: proving to the masses that buying into their virtual world is worth it. And this, I think, is where both Mark Zuckerberg and Tim Sweeney are missing the point.

“Snow Crash” and “Ready Player One” take place in dystopian worlds where corporations run unchecked. To regular people, like you or me, the prospect of having to interact with a virtual reality controlled by corporations and run for profit isn’t very appealing.

In those stories, the companies running the metaverse have more control over people’s lives than anything else. That doesn’t sound appealing to anyone who doesn’t work at Epic or Meta – a fact to which Zuckerberg and Sweeney are seemingly oblivious. But who’s to tell a billionaire that he missed the point of a book?

Simply put: both companies have to prove to us that a metaverse is worth our time. Thus far, the actual value proposition is very vague and amounts to “wouldn’t a virtual world be cool?”

We already have Second Life, Mark.

This isn’t lost on social media users. The announcement generated a solid amount of buzz. Moments after the rebranding was announced, the mentions for “meta” rose sharply, and that opened the floodgates for meme makers.

Both positive and negative opinions gathered around the same number of impressions, mostly on social media. 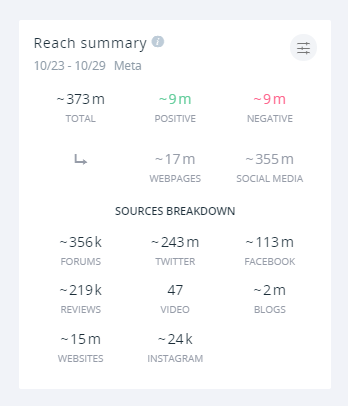 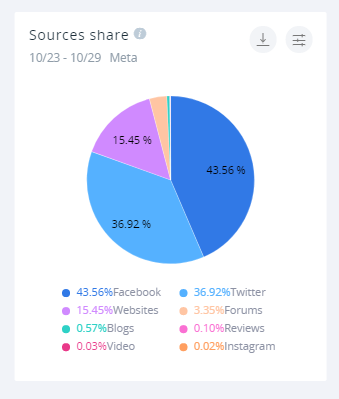 Here’s a selection of the best memes we picked up through SentiOne:

“The name of the company is Meta. It's a cutting edge high-tech Web 3.0 company with no data and consumer exploitation issues whatsoever currently trading at a deep discount to fair value” pic.twitter.com/4cEvkgzyCl

“meta” when they’re called into court to answer for facebook influencing elections pic.twitter.com/S4qEVWKSwn

And where there are memes, there are the marketers, trying their best at real-time marketing campaigns… With mixed results. While sometimes they can produce genuine humour, it’s clear that they can’t hold a candle to regular Twitter users. I mean, seriously, Peptang? Three likes? Embarrassing.

Tastes good no matter what you call it. Your taste buds will meta meta ✨😂. #BetterTogether. pic.twitter.com/aazsIvZo27