It’s official — Elon Musk, CEO of SpaceX and Tesla bought Twitter for a whopping $44 billion. The world’s wealthiest man methodically acquired an increasing amount of the company’s stocks starting around January this year, only to formulate a proposal by mid-April to buy the platform wholesale and transform it back into a private company (Musk is currently facing a lawsuit due to his failure to disclose the amount of stocks acquired in time).

Although Musk’s offer might’ve initially seemed frivolous (he himself admitted that he is not interested in the financial side of the enterprise and doesn’t know whether he would be able to actually buy Twitter), all signs indicate that Musk will soon become the owner of one of the world’s largest social media platforms. The billionaire himself has mentioned ‘unlocking the potential’ of the platform, as well as its important role in building a space for ‘discussing issues of key importance to humanity’.

While Musk’s superlatives about the company he is currently buying shouldn’t surprise anyone, Twitter and Musk have a special bond — Musk’s account is followed by almost 85 million users, and Musk regularly makes headlines over his behaviour on Twitter. In 2018, Musk used Twitter to offer ‘support’ to the Tham Luang cave rescue team in Thailand by pushing a ‘mini-submarine’ of his own company’s design. When a diver directly involved in the rescue action questioned the usefulness of the contraption, Musk — already followed by over 20 million accounts at that point — called him a ‘pedo guy’. Musk’s behaviour regularly directly affects Tesla’s share prices, which also tumbled when the billionaire first revealed his designs for Twitter.

Speculation about the purchase of Twitter by Elon Musk has been gaining traction on the platform for almost a month. Info about the apparent Musk-Twitter agreement only increased its calibre — both regular users and celebrities are now considering leaving the platform. Actress Jameela Jamil has already posted something she ‘would like to be her last tweet’:

Ah he got twitter. I would like this to be my what lies here as my last tweet. Just really *any* excuse to show pics of Barold. I fear this free speech bid is going to help this hell platform reach its final form of totally lawless hate, bigotry, and misogyny. Best of luck. ❤️ pic.twitter.com/fBDOuEYI3e

Actor and Democratic Party activist Rob Reiner has mused if Musk’s takeover of Twitter means the return of a ‘Criminal’ to the platform — context indicates that the unnamed Criminal is Donald Trump, whose account was deleted after his supporters’ bloody attempt at ‘retaking’ the Capitol:

Now that Elon Musk is buying Twitter, the question for all of us is: Will he allow a Criminal who used this platform to lie and spread disinformation to try to overthrow the US Government to return and continue his Criminal activity? And if he does, how do we combat it?

Despite the strange, quasi-Manichean figure of the Criminal (or perhaps because of it), Reiner’s tweet has become particularly popular, reflecting, at least in part, the sense of concern prevailing among some parts of Twitter.

Trump ally Rep. Marjorie Taylor Greene has already called for the restoration of accounts linked to Trump and far-right conspiracist Alex Jones (along with her own account, of course):

BREAKING: Marjorie Taylor Greene demands that Twitter restore her personal account, Alex Jones', and Donald Trump's now that Elon Musk has bought out the social media company for $44 billion. RT IF YOU THINK ALL THREE ACCOUNTS SHOULD REMAIN BANNED!

Musk often mentions freedom of speech as a sort of principal value, having previously called himself an ‘freedom of speech absolutist’.  In another Tweet, Musk said he hopes ‘that even [his] worst critics remain on Twitter’:

I hope that even my worst critics remain on Twitter, because that is what free speech means

The quantity of mentions regarding Musk and his Twitter-related activities has recently skyrocketed on all major social media platforms. 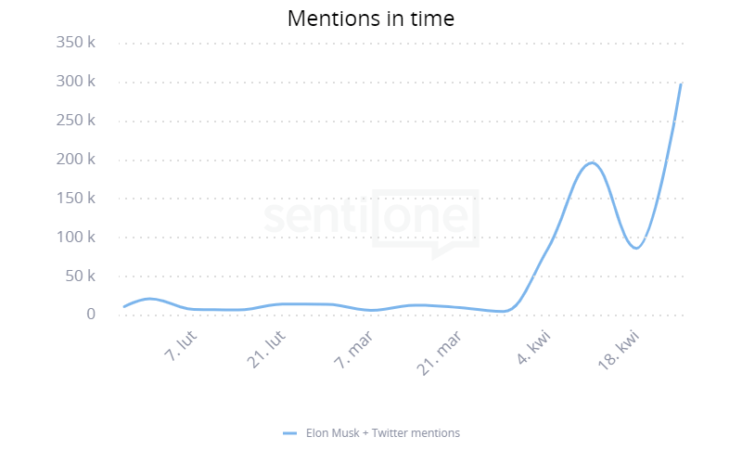 The first leap corresponds to Musk’s shares disclosure, the next one is tied to the recent confirmation of Twitter’s purchase. Likely due to the sheer difference in scale between the platforms analysed, most mentions come from Facebook, not Twitter. 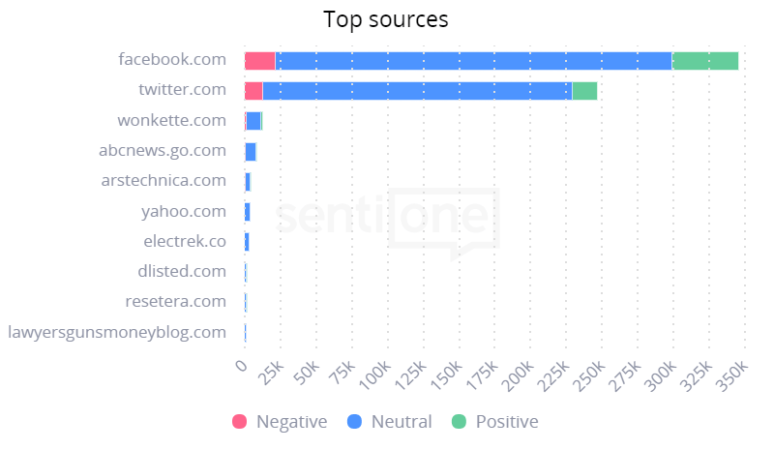 The relatively strong polarisation of views on Musk’s recent endeavours reflects wider public opinion. A rarity among the super-rich, Musk has built up a multi-million loyal following around him, thanks to his skillful (or rather, frequent) use of social media.

Time will tell if this self-proclaimed ‘freedom of speech absolutist’ can withstand the mixed feelings of Twitter users and stop their anticipated exodus.

How social listening can save your back? Learn from M&S #bosombuddies fail