Hello and welcome to the SentiOne Social Media Digest! The media cycle in August was chaotic and eventful, but don’t worry – we selected the most interesting topics (from a social media perspective, anyway) and analysed them using our state-of-the-art social listening solution.

If this is your first time reading our digest, here’s the ground rules. All of the data presented here has been captured using SentiOne, our flagship social listening solution. By clicking on each heading you can look at the interactive dashboards we used while writing this article.

You can also read previous installments of this series here: July, June, May, April, March, February.

IPCC Report – heated discussions but not much action

Earlier this month, the Intergovernmental Panel on Climate Change released a report that should have shaken the world. In it, leading climate scientists from around the world unilaterally declared: the climate has become irreversibly changed by human activity. The damage is done: we can only contain its extent.

The world is now living through climate change, not watching it draw near, says the IPCC https://t.co/WkVKGhAb88

The online discussion surrounding the IPCC report has been, on the whole, mixed. We must note, however, that the negativity is largely outrage directed at the people in power, whose inaction only exacerbates the problem. 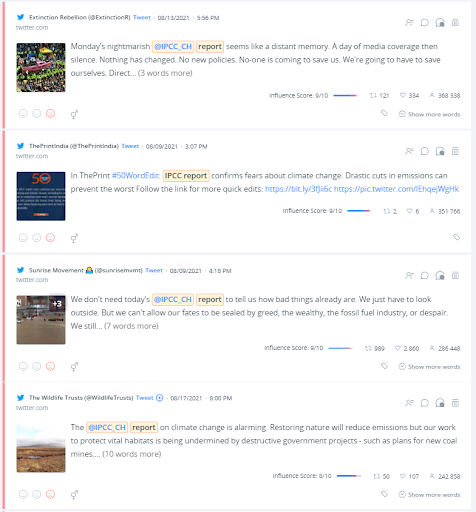 The positive mentions, on the other hand, praise the report’s direct language. Frankness is appreciated, especially in times of crisis. Other positive mentions propose ways to mitigate and adapt to the situation, as well as calls to immediately end all fossil fuel use. 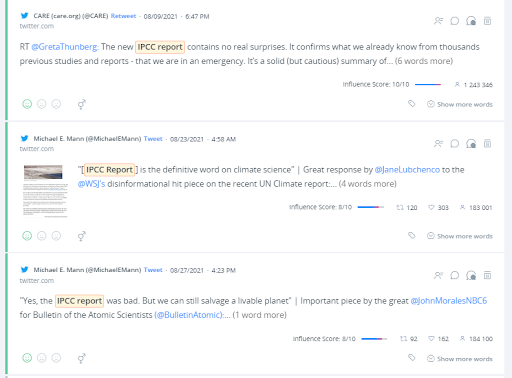 As this is a global crisis, it is being discussed globally, in multiple countries and in multiple languages. Germany is the leader when it comes to the amount of mentions – and for good reason, as the country has experienced unprecedented amounts of flooding last month.

What in the world is the Tesla Robot

A confusing press conference was held by Elon Musk earlier this month. The billionaire had a man dressed in a zentai suit walk onto the stage and pretend to be a robot prototype. Yes, Tesla is entering the world of robotics… in the most confusing way possible.

The Tesla and SpaceX CEO wants to build the robot as a replacement for human labourers performing dangerous tasks. The problem is, the company hasn’t actually begun work or even hired robotics engineers yet. Musk says his self-driving Teslas are essentially robots on wheels – so transferring that technology onto a humanoid robot “makes sense.”

What doesn’t make sense, however, is dressing a guy up in spandex to dance to dubstep. The whole idea of a humanoid robot is… well, let’s just say the last fifty years of mass media have conditioned us to recognize the danger.

Where have I seen Elon musks Tesla Bot before…. pic.twitter.com/JHNmetEwPa

The media have also pointed out that Musk himself warned of a “Terminator-like” scenario in which AI rises up to kill all of us. Let’s just say the skepticism to the Tesla bot is warranted. For what it’s worth, it’s social media metrics aren’t looking bad for an announcement with no substance. We had our laughs and we’ve all but forgotten about the dancing man in spandex. 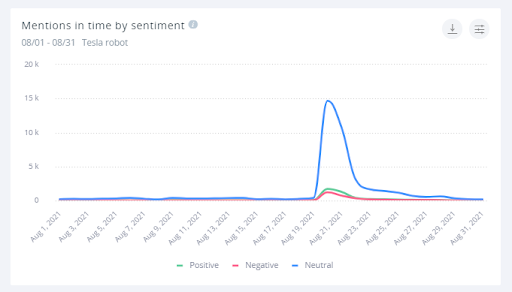 It’s worse than Peppa Pig, according to Pitchfork.

Donda was met with a mixed critical reception – a rather anticlimactic way to end the epic saga of the album’s production. From paying $1,000,000 dollars a day to live in the Mercedes-Benz Stadium in Atlanta, through multiple listening parties, to truly bizarre sample choices – we witnessed the most unusual creative process ever since Phil Spector pulled a gun on the Ramones.

Critics, however, are just one piece of the puzzle. Donda’s success can’t be denied. It only took it 24 hours to dethrone Olivia Rodrigo as the most streamed album on Spotify this year. On the social media front, the album also enjoyed a mildly positive response.

The negative comments tend to revolve around collaborations and features Kanye chose for the album. The most shared critical mention comes from Soulja Boy, whose verse was reportedly dropped from the song “Remote Control.”

Kanye himself also contributed to the volume of negative comments – by claiming that his record label released the album without his authorization. According to him, they also dropped a track named “Jail, pt. 2” from the final version, due to it featuring DaBaby and Marilyn Manson. Both of the musicians were recently faced with heavy criticism: the former for homophobic comments, the other for sexual abuse allegations.

Chatbots and artificial intelligence in business. Where are we really?

BIG CHRISTMAS DATA – Most popular Christmas song and other statistics 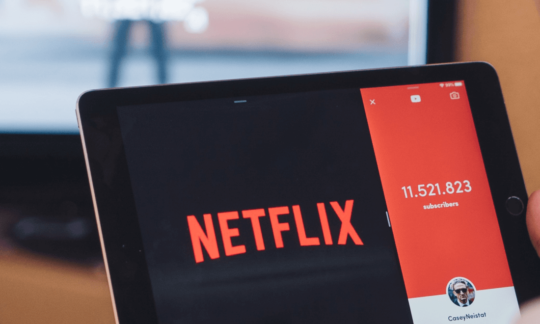