Online product launches in the age of COVID

You’ve heard this a thousand times: COVID-19 has changed human society forever. Long gone are the old ways! We must adapt or perish! This is the new normal! This, of course, remains true as ever; however, few of us actually take the time to stop and really think about the implications.

For instance, we’ve all accepted that we’ll probably never go back to riding public transportation without a mask. But have you ever thought about this from the bus company’s point of view? They can only carry half as many passengers at once; this means more buses are needed, which means more drivers and vehicles. Who’s going to train them? Who’s going to build the buses?

We could explore these butterfly effects all day long; the implications just keep going and going, deeper and deeper, like a fractal.

Let’s take a moment, then, and talk about products. Specifically, product launches: the world may have changed, but business has to keep going, and that means new products and services. Most companies have already shifted to exclusively online launches – some with more success than others.

In this article, we’ll take a closer look at some recent product launches and try and figure out what they did right, and what they did wrong.

In recent years product launches fuelled the event marketing industry successfully. Any brand worth its salt would decide to launch its flagship product with a big bang – renting the fanciest stages or exhibition centers, inviting celebrities and influencers, hiring PR specialists to create buzz before, during, and after the launch.

For example, when Apple launches a new product, you don’t see some PR person reading out a press release during a press briefing. They stage an entire event around it, going so far as to even close their online store, so that everyone knows something important is happening and they need to pay attention.

And who do you have taking center stage? None other than the CEO of the company. He isn’t so much a speaker as a showman, spending days or even weeks leading up to the launch planning his every word and gesture so that it leaves the audience spellbound.

Just as the industry managed to create a reliable blueprint for successful and noisy product launches, the global pandemic arrived. Theatres and exhibition centers closed down, any gatherings were officially banned, people started to avoid public interactions. The industry of product launches and event marketing had to move online. We have analysed some of the recent online product launches – how did they do?

Twitter needs no introduction, but their Fleets feature probably does. Two months after its launch, the feature does find some use, but it has all but disappeared from the public eye. It came as a surprise announcement and fizzled out almost instantly – so what went wrong?

To start off, let’s discuss what Fleets even are. Simply put, they’re Instagram stories, only on Twitter. They’re the same concept – posts that disappear after a set period of time – and they offer similar features as Instagram Stories or Snapchats. 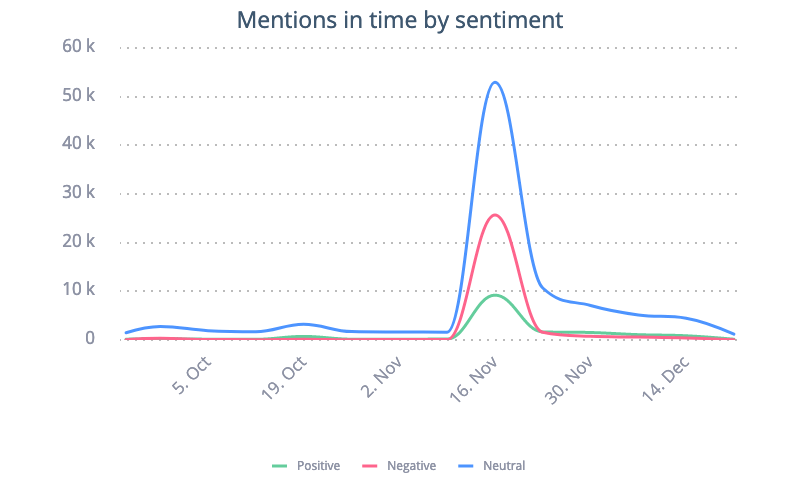 A sentiment analysis for the keywords “Fleets” and “Twitter Stories”. The negative sentiment is overwhelming.

Unlike Snapchats and Instagram Stories, however, Fleets don’t exactly offer anything innovative. It’s just the same old, with less features than what the competition offers. There’s not really a reason to use Fleets, much less spend valuable development time and resources on.

As you can see by the overwhelmingly negative response on the graph above, Fleets weren’t received very warmly. The bottom line is that Twitter users simply didn’t want that feature; instead of improving their core service, the company decided to just imitate the competition for no clear reason.

But hey, at least we got some truly spicy memes out of the whole debacle:

Excel has stories now too 😍 pic.twitter.com/022UwhPLHY

PlayStation 5: how many times must we teach you this lesson, old man?

Despite being a consistently strong contender on the video game console market, Sony never had much luck with their launches. The first PlayStation was a massive hit; its successor, the PlayStation 2, still remains the best selling console of all time. It’s also where the trouble started.

You see, early models of the PS2 had a fatal flaw in its hardware that rendered the console unusable; it even resulted in a class-action lawsuit. The company also didn’t provide enough stock for stores. Even though faithful gamers camped out for days waiting to get their hands on the latest and greatest, they weren’t guaranteed to get one.

Fast forward a couple of years, and the PlayStation 3 had similar issues: not enough stock, ridiculously large price tag, constant hardware failures… The launch is widely remembered as a disaster. Although the PlayStation 4 largely managed to avoid those pitfalls, the PlayStation 5 (which launched last month)… Well.

It started with preorders. More accurately, it started with Sony’s inability to handle them. Usually, a market leader should be able to roughly predict the demand for their product. As such, they can be expected to allocate enough resources. Add to that COVID – most people are going to buy their console online. Obviously, you need to make sure your websites are in top shape.

This wasn’t obvious to Sony. The preorder sites crashed and burned within minutes, with only a very lucky few able to secure a preorder. Sony quickly had to save face, but their efforts were less than stellar.

Let’s be honest: PS5 preorders could have been a lot smoother. We truly apologize for that.

Over the next few days, we will release more PS5 consoles for preorder – retailers will share more details.

And more PS5s will be available through the end of the year. pic.twitter.com/h1TaGsGBun

The situation was only made worse by the sheer amount of scalping going on. Scalping is, of course, the practice of buying an in-demand, limited product only to immediately sell it for vastly inflated prices. Even once preorders opened up again, the consoles were snatched up by automated bots, leaving legitimate customers empty-handed. 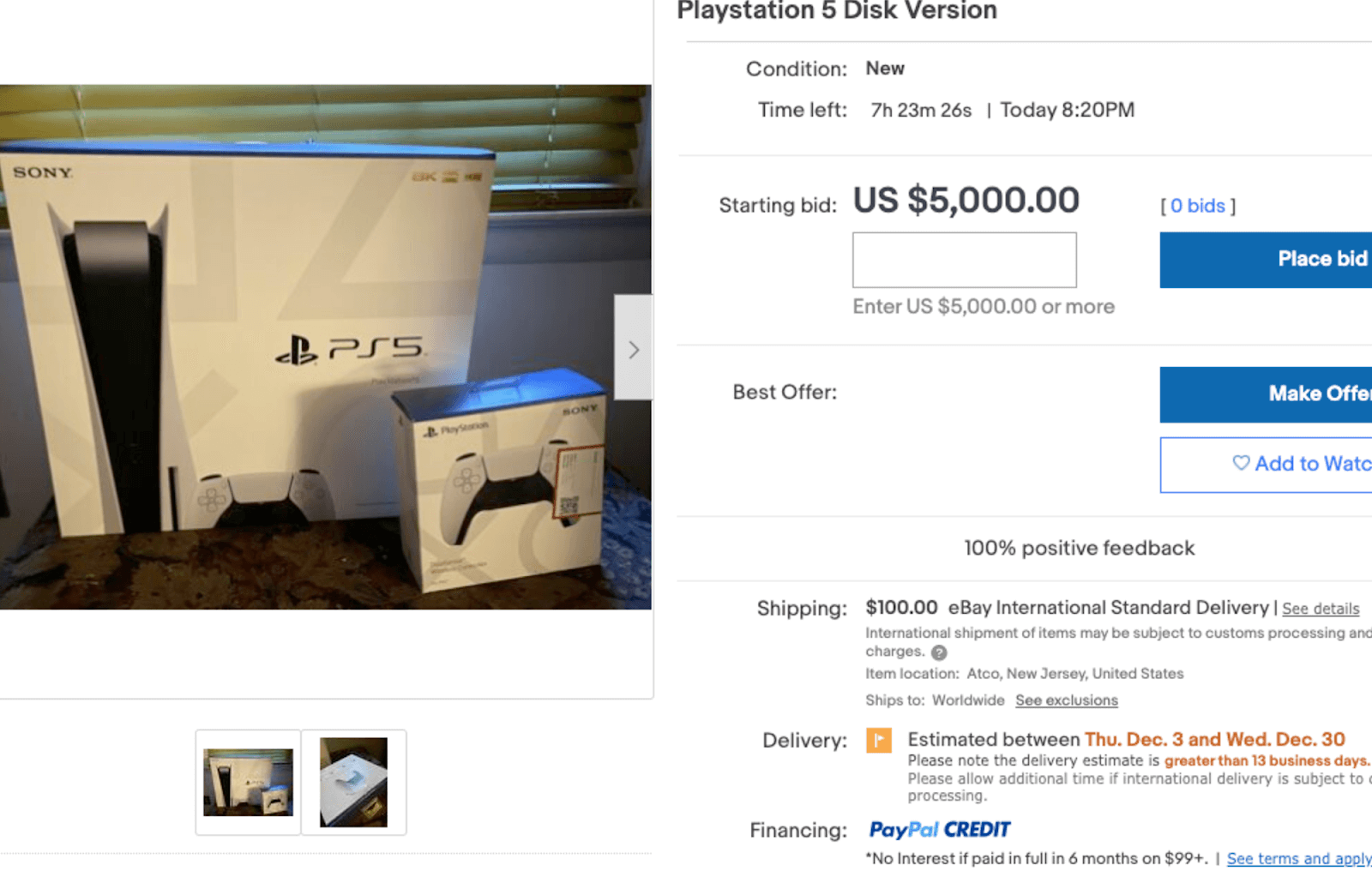 Even with these warning signs in plain sight, Sony didn’t heed the warning; they didn’t manufacture enough stock. The PS5 was immediately sold out “everywhere”, according to Sony themselves! Although this might seem like a success for the company, consumers were less than pleased.

The situation didn’t improve with time. With the holiday season peaking this week, PlayStation 5 consoles are still difficult to get a hold of.

Cyberpunk 2077: when reality does not match your marketing

Out of all the launch disasters we’ve seen in 2020, none will be remembered as much as the long-awaited launch of Cyberpunk 2077, the latest video game by CD Projekt Red, developers of the acclaimed Witcher franchise.

CD Projekt Red are known to gamers primarily thanks to The Witcher 3, released in 2015, is considered to be one of the greatest games of all time. It’s based on Andrzej Sapkowski’s saga of novels and contributed greatly to the popularity of the franchise overseas. Its success launched Geralt of Rivia, the titular Witcher, to international stardom. Aside from games and novels, a Netflix series was made and an animated movie spin-off is in production.

It was also a damn good game, garnering critical praise across the board and selling an estimated 28 million units.

Not bad for a small, local company primarily known for translating and publishing western RPG games. CD Projekt Red quickly established itself as a heavy-hitter in the world of video games.

The announcement of Cyberpunk 2077 in 2012 was met with heavy excitement – they did the Witcher books justice, surely they can do the same for the Cyberpunk 2020 tabletop game!

To call the launch of Cyberpunk 2077 a disaster is putting it mildly. There were warning signs: the company came under fire for poor working conditions, including crunch. Several aspects of the game’s marketing came under fire. The game was notably delayed three times: it was originally scheduled to launch in April 2020. Most notably, early reviewers were forbidden from including their own game footage or talking about technical issues in their reviews – an unusual demand, to say the least.

In the weeks leading up to the game’s release, the hype was unprecedented – the marketing campaign, flawed as it was, clearly worked. And then it all came crashing down.

The game was unplayable on consoles it was designed for. The PC version deletes save files without any possibility for recovery. Unskippable sequences in the game trigger seizures in players.

What’s worse, CD Projekt Red CEO Adam Kiciński praised the performance of the game on PlayStation 4 and Xbox One (the platforms most affected by bugs and poor performance) during an investor call mere weeks before the game’s final release.

Having been caught lying about the game, CD Projekt Red had no choice but to start offering refunds. This, however, was too late. Due to an apparent misunderstanding between CD Projekt Red and Sony, the game was pulled from sale on the PlayStation Store. Both Sony and Microsoft are offering refunds for the game, no questions asked – in an unprecedented turn of events, even brick and mortar retailers such as GameStop and Best Buy have started offering refunds.

Despite the game selling strongly, the backlash to the game has definitely made an impact. The game’s PlayStation 4 version currently stands at a 3.3 user score on Metacritic, the company’s stock fell 22% after Sony pulled the game, and a class-action lawsuit is being considered against CD Projekt Red.

Cyberpunk 2077 was marketed and hyped up to be something it clearly wasn’t: despite warning signs being there, from the controversial marketing campaign to constant delays and over a year spent crunching on the title, the hype continued to amass. The fire was further stoked with communication from CDPR management, assuring fans all was well.

Unfortunately, no amount of hype can change reality. Cyberpunk 2077 will remain talked about for years, yes; just not in the way CD Projekt Red intended it to be.

What did we learn?

These are just some examples of product launches that shouldn’t have happened the way they did. Many factors can be attributed to their failures, but lack of foresight seems to be the one unifying factor. Your key takeaways should be as follows:

Fortunately,learning about your customers’ expectations has never been easier – modern social listening tools, such as *cough* SentiOne can put you in the middle of the conversation, every time.

By analysing online conversations, for instance, Twitter would realise its users didn’t actually want Fleets. Sony could have more accurately gauged the interest in the PS5. CD Projekt Red… well, we can’t stop you from making bad decisions. We can certainly provide you with information, though! Get in touch with us and start your free trial period today!