We live in an age where it is increasingly difficult to market products. Let’s face it – people have been burnt by brands in the past. Unethical advertising campaigns by large companies led to rising consumer awareness – and as such, customers are now cautious when interacting with brands as a general rule.

This leaves marketers in a curious position – how do you advertise your products and services to a population who increasingly rejects traditional advertising? There are many approaches to solving this problem. Out of the various methods that have been attempted so far, “humanising” the brand is certainly one of the most effective.

What exactly is “humanising the brand?”

Humanising the brand is the strategy of establishing an emotional connection between a brand and its customers. There are multiple ways this could be done, but the basics boil down to shedding the image of a monolithic, faceless corporation. Instead, show a real human side to your business. Share stories of your employees – allow your customers to put a face to the brand name.

By presenting your company as real people instead of just a logo, customers can easily empathise with your messaging. Be sincere enough, and you may just win them over to your side.

Of course, be mindful of the customers’ inherent distrust towards brands – they are always actively dissecting your messages for any signs of advertising. Because they’re being blasted with marketing messages 24/7, customers have developed an uncanny ability to detect and avoid marketing.

As such, humanising your brand is not as easy as it may sound.

What are the benefits of humanising your brand?

Play your cards right, however, and you’ll reap the rewards. Connecting with your audience on an emotional level brings many benefits that would otherwise be difficult to achieve.

One of these benefits is engagement. Social media is an increasingly liminal space – Twitter is a completely different beast than what it was even last week. Being relatable to denizens of such spaces is a rare art – but those who master it can count on recurring viral posts.

Some brands turn to influencer marketing as a shortcut to virality, but they can only take you so far. Is it any wonder why good social media managers are worth their weight in gold?

By presenting your brand as an approachable entity you can suddenly increase your reach well beyond your initial target audience. New interest groups and demographics can suddenly make themselves manifest if your messaging resonates with them.

These new groups bring with them even more marketing opportunities. Suddenly, you’ll find yourself free to try new types of content and new ways to connect with your potential customers.

How to humanise your brand – as shown by these two examples

There’s no “one size fits all” approach to humanising your brand – everything depends on your particular situation. In order to make your life easier, however, we’ll take a brief look at two brands and how they approached the task.

These days, Bon Appétit is mostly known for its YouTube presence – they are a genuine phenomenon with almost six million subscribers all over the world. Many of these viewers, however, are unaware of the fact that Bon Appétite is, in fact, a print magazine!

Originally, the goal of the YouTube channel was to promote the print magazine simple, digestible cooking tutorials. This approach worked, but it wasn’t until 2016 when the channel became a viral success by introducing the “It’s Alive” segment.

The “It’s Alive” videos, hosted by Brad Leone, were a stark departure from the channel’s previous content. The combination of casual humour, a rather loose approach to editing and an overall good-natured, comfortable vibe helped the series capture the hearts of many. Further series soon followed, and the channel has soared in popularity ever since.

Because of this newfound popularity, the Bon Appétit brand has been exposed to new audiences across the globe. Instead of being limited to its established print audience, it is now one of the most successful YouTube channels – a staggering success! 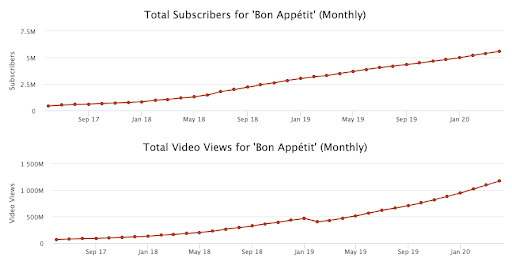 If you played video games in the 1990s, there are certain names you’ll react to with instinctive reverence. Doom, Quake, Duke Nukem – these were the video games whose influence on the video game industry is still felt to this day.

You’re not alone in this reverence – to this day, “boomer shooters” have active and dedicated fan bases. Some of these fans have even started making games themselves.

Enter New Blood Interactive, a publisher devoted to putting out new games harkening back to the good old days. When New Blood entered the scene they had a problem on their hands – how do you market rather niche games to a wider audience?

The answer turned out to be a fantastic social media presence, led by the meme-fueled Twitter feed of New Blood head honcho, Dave Oshry (@DaveOshry). Since he grew up immersed in gamer culture, he knows how to communicate his love for games to his company’s audience. This has not gone unnoticed by the industry, which rewarded him with a lot of good publicity – and good sales!

Being approachable and humorous clearly worked! New Blood is not just a financial success – it also has a devoted fan following. Some of these fans have even been invited by Oshry to contribute to some of New Blood’s flagship titles.

Should I humanise my brand?

In short – if you’re trying to connect with humans, humanise your brand. Unless your business absolutely demands you put up a solemn, professional appearance (for instance, undertakers), there is no reason to pretend you’re not human beings. This is especially important if one of your biggest target demographics are younger people – millennials and Gen Z – who are particularly averse to traditional advertising.

Humanising your brand often requires you pay close attention to current trends on social media. That’s where we come in – our social media listening package, SentiOne will help you figure out what’s hot and what’s passe. Get in touch with us to schedule your free trial today!

EasyJet – we got your back! Lessons learnt from EasyJet social media crisis.

Online-to-Store. The evolution of the e-commerce universe.