In a lot of indigineous cultures, music is sacred. The U’wa people of northern Colombia, for instance, gather every year – they believe that through music, they sing the world into being. Once the music stops, the world ends.

This isn’t entirely dissimilar to capitalism, as was proven this week. Through the sheer power of memes, redditors from /r/wallstreetbets managed to raise the GameStop stock price to unbelievable heights. It also demonstrated how the stock market is based only upon belief.

GameStop, of course, is the brick-and-mortar purveyor of video games and video game accessories. Video games, of course, have been experiencing a dramatic shift towards digital distribution. The pandemic only accelerated this process – who wants to leave their house, anyway?

As such, GameStop has been expected to lose money this year. Despite that, if you take a look at the stock market…

What social listening can tell us about short selling 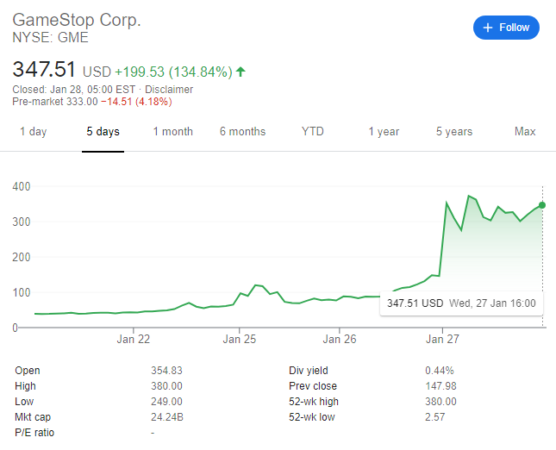 Here, at SentiOne, our business is monitoring social media for interesting blips and anomalies – so when we saw GameStop trending on our dashboards, I instantly dug in to figure out what was going on.

So, what happened? In a word – short selling gone wild. In plain terms, short selling is when a seller borrows stock and sells it at market price. They do so hoping that the stock will decrease in value, allowing them to return the stocks to whoever they borrowed them from, pocketing the difference.

In essence, it’s a bet. Short sellers essentially bet a stock will go down in price, because that’s how they make their money. This is how hedge funds make their money – by betting on losses.

Reddit decided to troll the process somewhat by hyping up GameStop shares. This created what’s known as a “short squeeze”. Essentially, if a short seller’s stock goes up in price rather than down, they begin to incur losses. They are forced to either buy back their stock and eat the cost, or wait longer and risk potentially even greater losses.

In short, Reddit took hedge funds hostage. The plan was simple: hedge funds were eyeing the GameStop stock as a safe bet. If Reddit could drive Gamestop prices up, they would mess with hedge funds and make a tidy little profit as a bonus.

That’s exactly what they proceeded to do. Hedge fund managers were caught completely off-guard, none more so than founder of Citron Research, Andrew Left. A week ago he was predicting that GameStop stock prices would fall below $20. Now, he’s furious that he’s being outplayed “at his own game” by a bunch of bored redditors.

Citron Research is far from the only hedge fund affected by Reddit. Melvin Capital Management, valued at $13.1 billion, stands to lose its entire worth because of the whole debacle. It’s currently being bailed out by competitors – but it might be too late. Redditors have smelled blood in the water, and they’re not going to let Wall Street off lightly.

It’s at this point that we’ve seen significant buzz happen around the stock. Below you can see the SentiOne anomaly graph, detecting a significant rise in mentions for the keyword “GameStop”, corresponding neatly to its stock price rising. 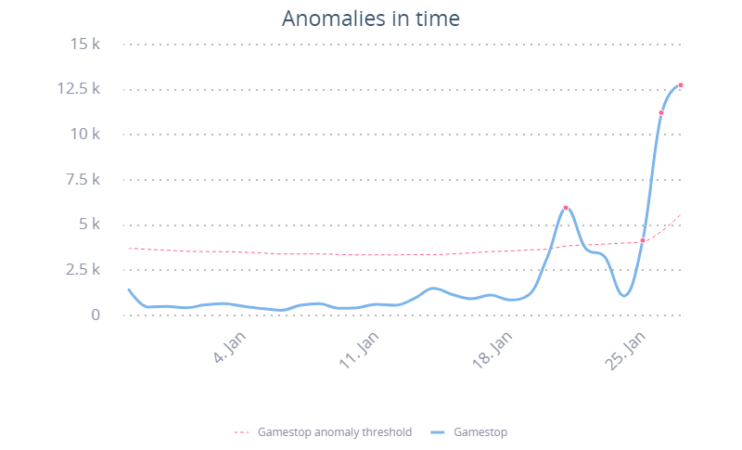 This increased media attention only made the situation more interesting. Now, regular retail investors were paying attention to the stock and jumping on the bandwagon. A single-word tweet from Elon Musk drove the stock price up even higher, just adding fuel to the fire.

It is at this point that an outcry began from Wall Street day traders and hedge fund managers. This outcry, however, was thoroughly mocked on Twitter and elsewhere, with their arguments being boiled down to:

oh no the wrong people are manipulating the stock market

Some commentators have pointed out the poetic justice in what Reddit has done. It is, after all, lack of regulation and out-of-control short selling that triggered the financial crisis back in 2008 – a crisis which reverberations can still be felt even today.

Hedge funds and other financial institutions involved in causing the crisis were bailed out by the US government. Not only did they come out unscathed, some hedge funds even turned out a profit! As such, this act of symbolic revenge by the common man is all but warranted.

/r/WallStreetBets has written an open letter to powers that be @CNBC – they threaten to continue to bankrupt every last hedge-fund since Wall Street has screwed over the average American & always gets bailed out. They actually make great points, read: pic.twitter.com/MuVEfKoCOR

What’s more, this incident demonstrates how broken and open for manipulation the system is. Stock prices haven’t been tied to actual, real-world value in years – it’s all speculation! In fact, it has been manipulated for decades by hedge firms and financial institutions – the only difference here is that for the first time, it’s the “little guy” manipulating the market, and apparently we can’t have that if capitalism is to survive.

Personally, as a capital-G Gamer, I remember GameStop primarily as that place that always shorted customers on game trade-ins. It’s heartwarming to see they’re finally paying back their dues!

Rules for me, but not for thee

Of course, this could not stand. Big Capitalism had to step in and prevent the working class from further disrupting their machinations. Many redditors were using the Robinhood app to purchase their Gamestop stock – and on Wednesday, that ceased to be an option. Robinhood is now preventing users from purchasing Gamestop stocks, as well as several others related to the short squeeze.

While Robinhood claims they halted trading to “protect their customers”, it didn’t take long for redditors to discover that the biggest Robinhood clients were large market making firms, such as Citadel Securities. These firms invest heavily in hedge funds and stand to lose the most from the squeeze.

It also turned out to be a costly decision for Robinhood. US Congresswoman Alexandria Ocasio-Cortez was among the most shared posts regarding the matter, and her calls for investigation were met with agreement from a diverse spectrum of political standpoints. It also resulted in two (thus far) class-action lawsuits filed against the company. Several government inquiries and investigations have also been announced.

We now need to know more about @RobinhoodApp’s decision to block retail investors from purchasing stock while hedge funds are freely able to trade the stock as they see fit.

As a member of the Financial Services Cmte, I’d support a hearing if necessary. https://t.co/4Qyrolgzyt

Whether this results in any permanent change to the US stock market remains to be seen. This entire spectacle, however, demonstrates something very important: when an economy is based on belief and speculation, you won’t find a more powerful manipulating force than social media.