EasyJet – we got your back! Lessons learnt from EasyJet social media crisis.

by Agnieszka Uba on

Internet is an interesting space. On one hand, brands can use it to increase brand awareness and build engaged and loyal communities. On the other hand – it takes only one unfortunate mistake and the engaged community turns into a panel of critical judges using the Internet to spread negative word of mouth. Sometimes it slips out of control and turns into a classic social media crisis that went viral. Recent example? Tweet of EasyJet’s passenger that sat on a backless seat. You can imagine the joy of online commentators: EasyJet’s saving money, low-cost airline to the next level, post-Brexit cost-cutting, safety second, stools instead of seats, etc.… Don’t get me wrong – PR mistakes, tired brand managers, unfortunate reactions can happen to anyone – we are all humans after all. However, we can always look into ways to protect ourselves from potential backlash, mitigate the risks and if the crisis is unavoidable – handle it gracefully. Let’s review some lessons we can learn from EasyJet.

How did the backless crisis start?

Everything started on 6th August when Matthew Harris tweeted a picture of a fellow traveler on a faulty seat – allegedly one passenger was given a “backless” seat on a busy EasyJet flight from Luton to Geneva. In reality, no passenger’s safety was compromised, no one traveled on a faulty chair – once the boarding was completed the stewardess moved the unlucky passenger to a proper seat. Unfortunately, this crucial fact was almost removed from social media debate and the tweet went viral gathering quite an audience.

#easyjet beats @Ryanair to have backless seats. @IATA @EASA this is flight 2021 Luton to Geneva. How can this be allowed. @GeneveAeroport @easyJet_press @easyJet pic.twitter.com/EthMoWRR8P

Below you can find statistics from social listening tool SentiOne, which shows the peak of mentions on the day of crisis. EasyJet has just received more than a month’s worth of social media mentions in one day: 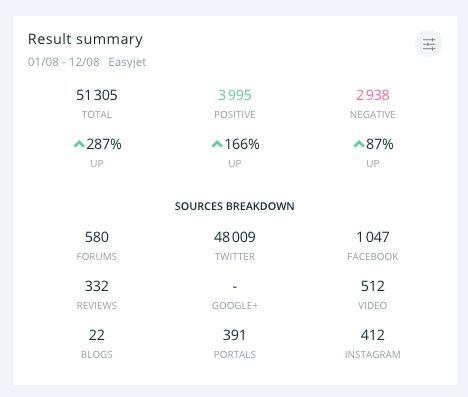 Since no one got hurt and no one traveled on the backless seat – where is the crisis coming from? Well, as the history of social media crisis showed in the past – crises emerge when there is no reply from the brand, or when the reply is completely missed. And the latter is the case of EasyJet. In the middle of backless seat jokes, Ross – customer service agent of EasyJet – kindly asked for the picture to be removed from social media. You can imagine how the people of the Internet react to censorship – with the more escalated crisis. The reason to go viral was not the picture of a funny seat, it was the poor reaction of the company. By asking to hide the picture, they gave customers the impression that there might be more to hide. The result is that rather than taking control it has well and truly lost control.

EasyJet backless crisis – what could have been done better.

Hi Matthew, thanks for bringing this to our attention, before we can investigate this could I ask you to remove the photograph & then DM us more info regarding this, so we can best assist you. Ross https://t.co/Qq2zhBAizh

I have the following update: No passengers were permitted to sit in these seats as they were inoperative awaiting repair. Safety is our highest priority and easyJet operates its fleet of aircraft in strict compliance with all safety guidelines. – Dan

Is it a good idea for @easyJet to ask for the photo to be removed? Let us know your thoughts, #PR people https://t.co/7xs2Gjf6X5

How to keep your social media & customer service team ready for such crisis?

In the end, nobody sat on the “backless” seat and it was never intended to, however the issue went viral and there was some brand damage. Some brands even got the advantage of real-time marketing and continued the story of the ‘backless seat’.

Atleast our seats are designed to not have their backs on them… and ours are 20% off… Just saying #easyjet pic.twitter.com/InbmlVL8sI