Coronavirus and business – what you need to know

“May you live in interesting times” is considered to be one of the most cutting curses of all time. It’s hard to argue that the present situation is unprecedented. The COVID-19 outbreak, popularly known as the coronavirus, is unlike anything we’ve ever seen.

Most countries are asking people to stay at home. Air travel is grounded, public spaces are closed. There isn’t a timeline on when things will come back to normal.

In the meantime, all of us have to adjust to the situation. What does the coronavirus outbreak mean for business? Let’s find out.

What exactly is coronavirus?

Strictly speaking, the term “coronavirus” refers to an entire family of viruses. The virus we’re currently dealing with is technically called SARS-CoV-2. The disease itself goes by the catch name COVID-19. It spreads much like influenza – through tiny particles expelled during coughing and sneezing, as well as from contact with infected surfaces.

The virus has an incubation period of 14 days, during which symptoms don’t appear. These include fever, coughing, muscle pain, fatigue, and difficulty breathing. This makes the disease incredibly difficult to distinguish from the common cold, influenza, and other similar diseases.

The first confirmed cases of coronavirus were detected in the Chinese city of Wuhan on December 31st, 2019. The virus spread outside of the country in weeks. By the end of January, the World Health Organisation declared COVID-19 a public health emergency of international concern. By March 11th, the situation was officially declared a pandemic. 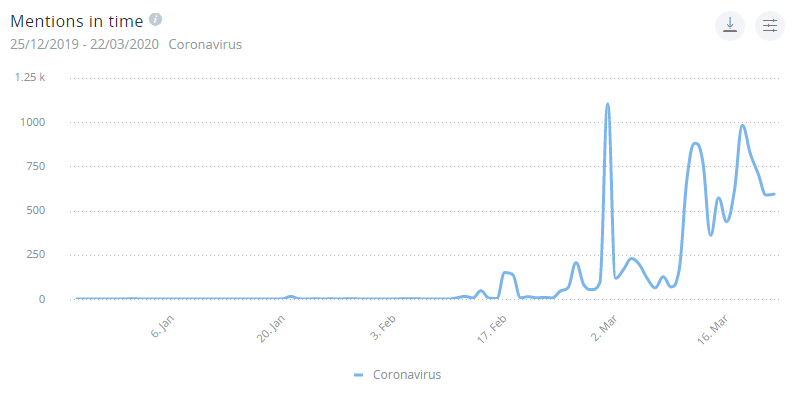 Worldwide mentions of the terms “coronavirus”, “COVID-19” and “SARS-COV-2”

The response to coronavirus

It didn’t take long for governments to take action. By late January, the Chinese authorities of the Hubei region (where the virus likely originated) locked down the entire province. Private car use was banned, while travel in and out of the region was heavily restricted.

Eventually, the measures were extended nationwide. Universities and schools have been closed, public holidays and festivals were cancelled and entire regions instituted mandatory remote work policies. Notably, temporary hospitals have been built and equipped to handle all of the coronavirus cases. These include the Huoshenshan hospital, which was completed in a record 10 days.

In other countries, the response varied. South Korea instituted a policy of mandatory testing of its citizens and moved the start of the spring semester. Italy, which has the second largest number of cases worldwide, instituted a nation-wide state of emergency. Entire provinces are locked down with access restricted by the military, while the death toll continues to rise.

The United States, on the other hand, was criticised around the world for its delayed response.  While many states declared a state of emergency by February, a response from the White House wouldn’t come until mid-March.

Home office for everyone!

By now, most of the world has instituted broad-sweeping measures to combat the spread of the pandemic. Chief among them is the policy of social distancing. People are encouraged to stay at home, work remotely if possible and limit their exposure to other people unless absolutely necessary.

The dramatic shift to office work has definitely had an impact on productivity. Although it’s too early to tell whether the shift was positive, one thing is for sure. Most of these meetings could have been emails after all! 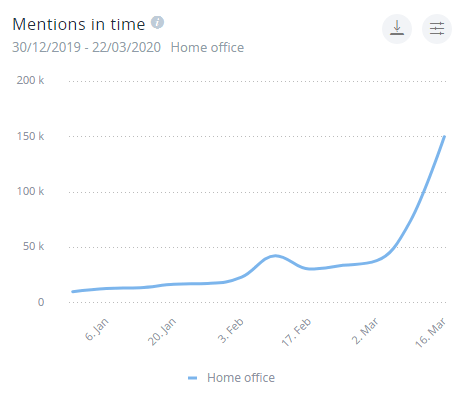 Worldwide mentions of the terms “home office” and “remote work”

The impact on daily life

The measures implemented by many governments to combat the spread of the virus have had a definite impact on daily life. Many countries have cancelled all public events and closed down their schools, along with shopping centres, restaurants, pubs, and many more.

This, in turn, has had a tremendous impact on business – many different industries are adapting to the new conditions. Grocery stores, for example, are limiting the amount of people that can enter the premises simultaneously. Larger supermarket chains are shifting to delivery only, as are most restaurants.

As mentioned previously, “white collar” work has shifted almost entirely to the remote work model. Office parks resemble deserted ghost towns, but for the most part, it’s business as usual.

Unfortunately, not everyone has the privilege of working remotely. Service level jobs – grocery stores, infrastructure maintenance, and – most importantly – medical personnel, have to remain on post.

These people are at greater risk of exposure, and in many cases they are not provided adequate protective gear. Panic buying of emergency supplies, such as N95 masks by people who absolutely don’t need them, led to shortages. Many people disregard advice released by their governments, which actually makes the situation worse.

What to do to stop the coronavirus

Unless you’re part of one of the high-risk groups (such as older people or those with weakened immune systems), the best thing to do is to stay at home as much as possible. Limit your exposure to other people to a minimum. Wash your hands frequently using liquid soap and above all else monitor your health.

If you notice worrying symptoms – dry cough, fever, a feeling of weakness – do not go to the hospital. Instead, call your local infectious disease department and make sure you get tested without exposing people in emergency rooms.

Don’t hoard supplies. There are people who need toilet paper and hand sanitiser more than you – immunocompromised and older people especially.

A sensible self-isolation period is anywhere from fourteen to twenty-one days. Make sure you don’t break it.

Do the maths – coronavirus is extremely infectious. While the normal flu has an infection factor of around 1.4 (that is, a person with flu infects 1.4 people on average), coronavirus has a factor of over 3. That means if the regular flu jumps across 10 different people, potentially only 14 people get infected. In the case of coronavirus, that number increases to 59,000.