Did you know? April 13 is the International Scrabble Day! To celebrate the occasion, we decided to ask around the office and create a mini-ranking of our favourite board games. Then, to make it interesting, we put each game through SentiOne Listen, to see what the internet at large thinks of our favourites! Here they are, in order of ascending popularity.

Everybody knows Monopoly. This classic board game turned out to be very polarising — it ended up at the very end of our list primarily because of its online sentiment. While 12% of all mentions for the game are positive, 8% are negative. Looks like going to jail, not passing go, and not collecting $200 is a universal experience!

20% of all conversations about Settlers of Catan take place on Google Play. This is because of the game’s mobile version, which isn’t a big hit with users. Bugs are mentioned frequently.

This is a shame, as the original board game is a stone-cold classic. It’s a particular favourite of Agnieszka, our head of product marketing.

Why do I love Catan? It’s easy to understand, competitive, and it lets you build an empire by farming sheep and wheat. Simply genius

The reason for our celebration. It was invented by Alfred Butts (yes, really, stop smirking) and since his birthday falls on April 13th, that’s when we celebrate the International Scrabble Day. This year, it’s on Wednesday — but usually, the game is most often discussed on Thursdays. 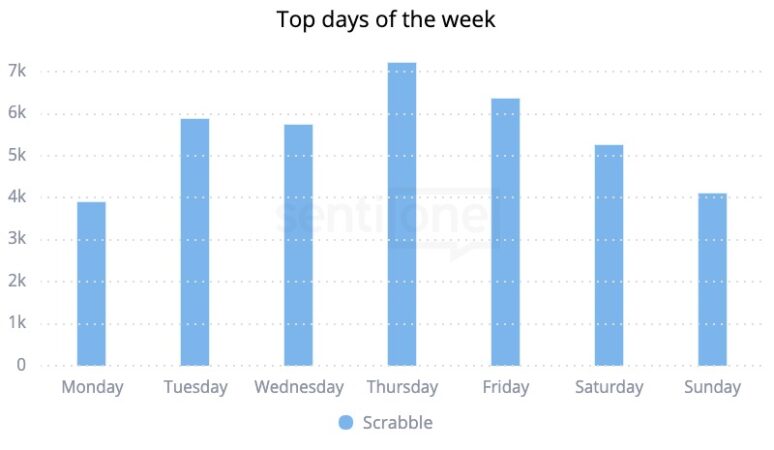 Terraforming Mars is a major success story in the board game space. In the six short years since its release, it received dozens of awards — and for good reason! The game is most often discussed on review pages and Twitter, where it always enjoys a healthy amount of discourse.

Nobody needs an introduction to chess, right? It’s the oldest game on our list, dating back at least as far as the twelfth century. Given its massive popularity all over the world, it’s no surprise that it has the highest amount of online mentions. We captured over half a million of them in the last year alone!

Gloomhaven is one of the most popular board games around — it’s currently at the top of the boardgamegeek.com charts. Even the top hashtag for the game is #boardgamegeek 🙂

I prefer story based & campaign games, however, most of them are full of luck which I don't like. Gloomhaven is different — the players are always in control. Moreover, it's a cooperative game. Nothing helps build teamwork like fighting monsters together!

Dixit is a narrative card game in which players are tasked to associate images with a theme. Its abstract and simple-to-understand gameplay made it a hit all over the world. Just take a look at our mentions map!

What I love about this game is the fact that it focuses on creativity. This is great especially when playing with friends and family - you get to see how they see the world. I recommend it to everybody who's looking for something different and fun!

Jenga is a classic skill game where players have to dismantle a tower made of wooden blocks without toppling it. It’s easy to understand, easy to set up and tons of fun to play — and it keeps growing in popularity. In fact, this is the one game on our list that’s closest to a 50/50 gender split — 52% of all Jenga mentions come from men, while 48% come from women.

Ticket to Ride is a standout on our list: every keyword in its keyword list is used primarily in a positive context. It’s a classic game with a dedicated fanbase — and it shows through its online mentions!

7 Wonders is a particular favourite in the SentiOne offices — and it’s also the best-rated game online. Here’s a couple of comments from satisfied players:

“Wow, this game is amazingly fun. I just happen to have won our first time playing, but we have since played three more times and I haven’t had this much fun losing since I can ever remember. “

“The game is so well made, easy to learn, quick play and so much fun!!!”

“There aren’t many 2 player games out there and definitely not any that I’ve played that are this fun! There are so many layers to this game!”

How to make your online reputation management strategy effective