On September 15th, Apple hosted its annual hardware event. “Time Flies”, as it was called, introduced us to the new range of iPads, Apple Watches, and much more – but it also featured an inconspicuous lack of the new iPhone. What did the internet think of the event? Let’s use social listening data to find out!

Events in the age of the pandemic

As is now the norm, the event was hosted exclusively online. I was curious to see whether or not hosting a high-profile event exclusively online would translate into more mentions. Thus, I decided to look at the number of mentions for the keywords “Apple”, “Apple Watch”, “iPad”, “iPhone” and “iOS” and compare the numbers from this month and from September of last year. Here’s the results: 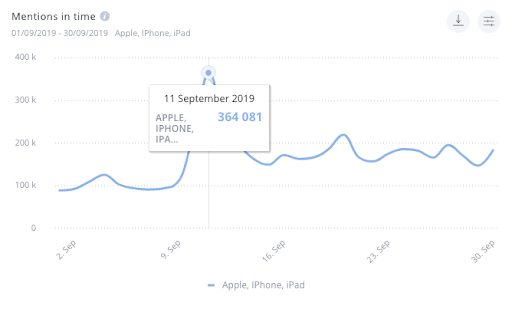 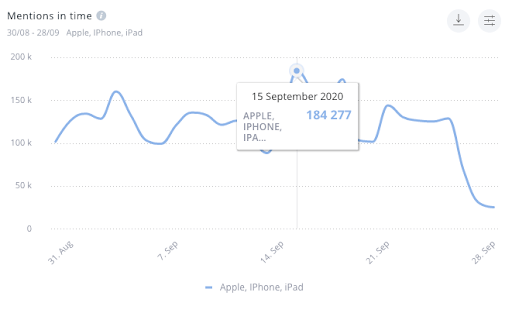 Curiously, this year the event drew around half the attention of last year’s. This can be attributed to many factors, but personally, I think it’s mostly because the press – and us Apple fans – knew in advance that the new iPhone, the star of the show, wouldn’t be making an appearance. We’ll be able to verify my suspicions soon – if the rumour mill is to be believed, we’ll get to meet the iPhone 12 in just a couple of weeks!

What actually was announced

So what did actually get announced? This year’s Apple event focused primarily on their mobile devices: iPads and Apple Watches. Out of these, the most attention went to the new Apple Watch – although even here, the shadow of the iPhone looms large. It didn’t take long for Apple fans to dissect the new Apple Watch in search of clues about the appearance and technical capabilities of the new iPhone.

The media, however, were more egalitarian in their coverage of the event. The most shared posts devoted equal attention to everything that was announced.

As for social media attention, CNN wins our grand no-prize for having the biggest reach in online discussions surrounding the event. They even managed to out-shine Apple themselves, which is no small feat! 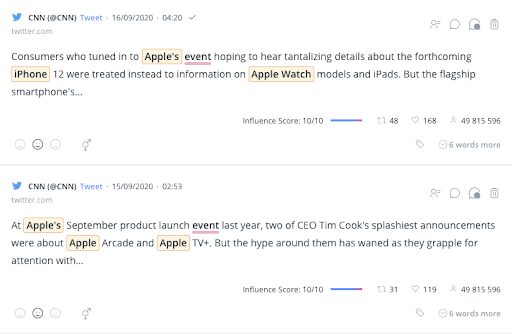 You can take a look at the data yourself – check out SentiOne interactive dashboard here.

Sentiment analysis – what did we think?

Overall, the event can be considered a success for Apple. The iPhone’s absence didn’t really impact the sentiment expressed about the company online. If anything, holding back the iPhone only served to drum up more hype. We haven’t seen any spikes of positive or negative mentions following the event.

One part of the event deserves a special mention, however – the new iOS update. Operating system updates are often controversial, and iOS 14 is a radical departure from previous versions. As such, I was curious to see whether the internet liked the update or not. 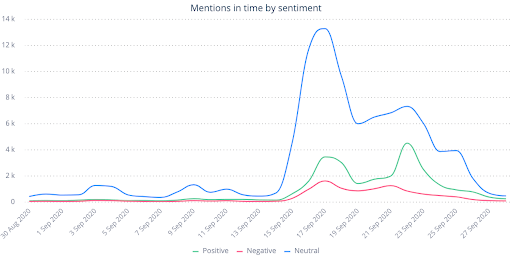 Overall, the response seems to be good – which is good news for Apple. It seems most customers have already forgotten the halcyon days of 2014, when iOS 8’s release was called “a horror show” by Forbes.

The second spike in positive mentions is primarily caused by big review sites and tech blogs publishing their first impressions articles about the new operating system – and readers widely sharing these posts. The subsequent announcement of a bugfixing update certainly helped matters, too!

The conspicuous absence of iPhone 12

Of course, the primary interest of these Apple events is always the new Big Thing – either a new lineup of Mac computers or the new iPhone. A lot of commenters, especially on YouTube, took to the comments to express their disappointment at not seeing the newest iPhone.

Where did we experience the event?

It should come as no surprise that Twitter was the primary hotspot for discussion regarding the event. Coming in at second place were dedicated websites, with Facebook coming in at third place.

In summary, the event whetted our appetites enough – while the new iPads and Apple Watches are all fine in their own right, all of us want to see what Apple cooked up for the next iPhone. The excitement is so thick, it can be cut with a knife among the Apple crowd at SentiOne, while our Android colleagues look on with bewilderment. Once the announcement event takes place, we’ll be keeping a close eye on the internet, to see what all of you think about the new iPhone 😊

All of the social listening data in this article was gathered by our own state-of-the-art solution, SentiOne. If you’d like to start your own social listening adventure, get in touch with us and schedule your free trial!