It’s official – we live in science fiction times. Although it’s not all jetpacks, rayguns, and summer holidays on the moon (yet!), the things we take for granted would make Asimov or Heinlein blush. Our cars can run on solar power instead of gasoline, we carry the concentrated sum of all human knowledge in our pockets, and we’re making steady progress towards space colonisation.

Most importantly, however, our daily lives become more and more influenced by artificial intelligence. Learning, decision-making, coming up with abstract concepts – all of these things are now more or less available to machines.

In fact, AI is already enshrined as one of the fundamental technologies of the modern world – so much so that we often don’t acknowledge its impact. Here, then, are some of the rather unexpected places where artificial intelligence lurks.

AI in video games – getting better since the 1960s

In the modern landscape of multiplayer-focused video gaming, it’s easy to forget how intertwined the worlds of video gaming and artificial intelligence used to be. In fact, video games were some of the first applications of AI technology!

From video games’ earliest beginnings, programmers and AI researchers strove to provideo players with a decent challenge. The first algorithms for playing chess came out as early as the 1950s (with one example being invented by Alan Turing himself!), although it wasn’t until 1997 when IBM’s Deep Blue famously beat Garry Kasparov, scoring AI’s first major win against a human grandmaster.

Chess, of course, isn’t everyone’s cup of tea – a lot of us prefer action to strategy, after all. 1980’s Pac-Man is the first famous application of AI. Pac-Man’s ghosts featured sophisticated algorithms dictating their movement, allowing them to react to the player’s action in real time – something previously unheard of.

As silly as it sounds, video games are the backbone of AI research. Many of the discoveries and innovations made possible thanks to gaming are still in common use today – after all, the same principles guide your Roomba’s pathfinding algorithms and the computer opponents in your Counter-Strike games!

As for video games themselves, AI and machine learning technology has become sufficiently advanced for algorithms to create games by themselves – as the excellent AI Dungeon 2 proves.

AI advocates and critics alike often raise a common talking point: ”there are certain inherent limitations that AI will never be able to overcome, such as creating art”.

Well, that may not be necessarily true. Advances in machine learning allow computer systems to analyse art and generate their own pieces. Although using computers to compose music isn’t anything new, allowing algorithms to create new music is a relatively new phenomenon. Many AI scholars attribute Brian Eno’s work on the Koan system as the starting point of generative music, even though Eno himself has been using similar techniques since at least the mid-1970s.

To make a long story short, AI-powered computer systems can now produce classical and jazz compositions which are almost indistinguishable from music created by humans. Iamus, the computer housed at the University of Malaga, specialises in creating new works of contemporary classical music. The London Symphony Orchestra collected and recorded some of Iamus’ works on the album Iamus. Give it a listen:

Music isn’t the only art form which machines dabble in. Recent advances in machine learning, AI-powered image recognition and analysis and automated image compositing made it possible for computers to create their own digital paintings.

The most famous example is probably the DeepDream algorithm, created by Google engineer Alexander Mordvintsev and unleashed upon the world in 2015. Although works produced by DeepDream have been varyingly described as “nightmarish”, “unsettling”, and “blasphemous”, there’s no denying it – the psychedelic visions created by the program are bona fide art. 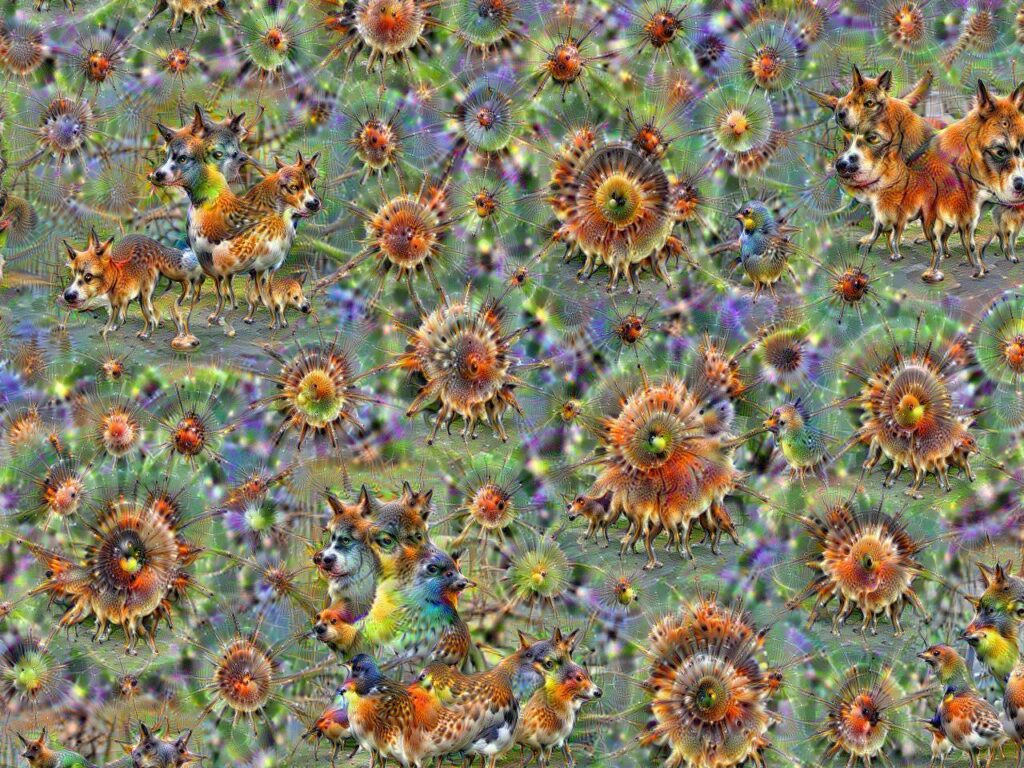 The glitch art community in particular embraced machine learning algorithms and AI-powered workflows. Applications such as Ganbreeder and Artbreeder help such artists to create entirely new images and aesthetics. The beauty, as artist Ian Keaveny points out, comes from the subversion and disruption of these algorithms to create something which could not have been thought of by biased human minds.

The world of modern finance is fertile ground for AI research. Already, the field is thoroughly dominated by technology – small surprise, seeing as stock trading was one of the first commercial applications for the internet. Today, millions of transactions are made every second. This is, of course, a perfect setting for AI powered traders.

…Except we haven’t yet seen a successful AI trading solution. Markets are exceptionally volatile, after all – introducing a foolproof algorithm for trading with a high success rate would likely bring down the whole system. AI powered stock trading is simply not compatible with the way modern economics work.

You can’t find a better cautionary tale against AI traders than the 2010 “flash crash”, in which one person managed to crash worldwide trading markets for a little over half an hour simply by gaming the way these algorithms work.

This doesn’t mean there isn’t a place for AI and machine learning in the world of finance. Quite the contrary – data analysis and pattern recognition performed on large data sets is one area in which AI excels.

Did you know that Photoshop runs on AI? The latest versions of the ever-popular graphics package started including AI-based features over a year ago. These include impressive filters based on neural networks, as well as refinements to existing tools, such as edge detection.

Implementing AI allows Photoshop to easily separate the sky from the sea in the above example. In older versions of the software that’d be almost impossible – the colours of the sea and sky are too similar for the program to tell them apart. That’s not an issue for a well-tuned AI, though.

Adobe really shows off the power of their AI in the Neural Filters features. Their uses range from impressive feats such as colorizing a black-and-white photo with a single click… 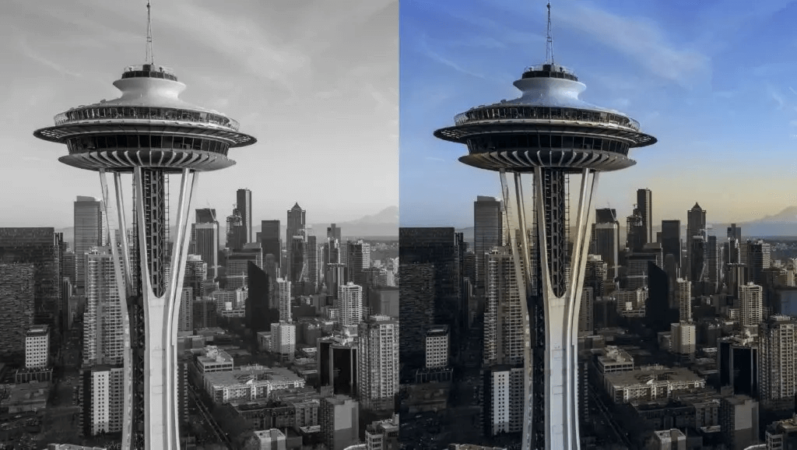 …to downright Uncanny Valley, deep fake territory – allowing the user to manipulate a person’s facial expression, age, and even the direction they’re facing!

Upscaling old videos with AI for fun and profit

In 1911, the Swedish newsreel company Svenska Biografteatern sent a camera crew to New York City. Their work resulted in an eight-minute snapshot of daily life in the Big Apple – and it’s been studied extensively by historians. By watching the footage, you can immerse yourself in regular life over a hundred years ago.

Despite the film being shot with 1911 technology, it’s quality is remarkable – tiny details, such as buttons on clothing can be easily seen and discerned. However, the low framerate and lack of colour are issues that we simply can’t correct.

Or can we? Thanks to the power of AI, the footage has been upscaled to 4K video at a full sixty frames per second. The result is simply stunning.

The video is the result of several ML algorithms working in tandem. It’d take too long to explain them in detail, but here’s the Cliff’s Notes: the AI is doing guesswork. By using frame interpolation, it creates and inserts new frames into the footage to smooth out movement. The original footage runs at about 14 frames per second. This means that 46 frames need to be created and inserted in-between. 73.33% of what you’re watching in the video above has been created by AI.

The upscaling works in a similar fashion. The AI upscales each frame and then fills in the details with its best guesses, based on its training dataset.

This means that this upscale isn’t exactly faithful to the original, although the differences are so small that you wouldn’t be able to notice them without a microscope. This is in large part due to the fact the original footage is of such a high quality. Upscalers are notoriously bad when it comes to low-resolution images, as demonstrated by Twitter user @Chicken3gg:

Which brings us neatly to our next AI application: forensics. We’ve all seen CSI: Miami, where David Caruso effortlessly “enhanced” blurry photos to reveal crucial pieces of evidence.

As our previous example shows, that kind of thing is impossible. This is why experiments in tying AI to the world of criminal justice need extreme care. Facial recognition technology works well enough for white people. However, algorithms misidentify people of colour from 10 to even 100 times more often. This, alongside privacy concerns, led to several US cities banning facial recognition technology.

This doesn’t mean AI can’t help investigators in other ways, though. AI and machine learning systems are useful for evaluating large datasets quickly. This comes in handy in detecting financial fraud – something which MasterCard is keenly aware of.

Unfortunately, utilizing AI in policing hasn’t always been a happy coupling. Many companies offering AI solutions to law enforcement agencies overstate the capabilities of their software. ShotSpotter landed a man in jail purely based on their “evidence,” which was later found to be bunk. An investigation revealed that their AI solution, which the developers claimed could detect gunshots, can’t actually detect live weapons fire – even if it’s happening in front of a ShotSpotter microphone!

AI in law enforcement still has a long way to go, and you can expect heavy regulation to dictate the direction the technology will take.

Ever play SimCity? It’s a video game in which you plan out and build a working city from the ground up. Roads, power lines, water and sewage pipes – all of that need careful planning.

For instance, roads – the more roads you have, the more expensive it is to maintain them. The benefit, however, is less traffic jams and, in turn, happier citizens. The goal of SimCity is to keep finding a compromise between costs and benefits.

Real city management is much more complex, of course, but the underlying principles are similar enough. If we can make an AI play SimCity, why can’t we use it to help with urban planning?

As one of the world’s most densely populated urban areas, Singapore is no stranger to cutting-edge urban planning technology. THey have been using computers to aid their planning processes since the 1960s – and have smoothly integrated AI into their efforts.

AI now helps Singapore’s urban planners by processing large volumes of data, discovering trends and anomalies, as well as helping optimize land usage. This last one is especially important – for obvious reasons, the city’s potential for expansion is limited.

Even in cities less dense than Singapore AI solutions can shine by helping to optimize public transportation, monitoring air quality or managing traffic congestion. As the technology develops and matures, expect more and more cities to start using AI in their urban planning.

For better or worse, we live in a global economy. This means that we often depend on resources and products made on the other side of the planet. Logistics, then, are the backbone of our economy and society as a whole.

Supply chain disruptions can be costly – we’ve seen plenty of examples in recent years. The COVID-19 pandemic has stopped 94% of Fortune 1000 companies in their tracks. Brexit is wreaking havoc on Britain’s economy. A single ship managed to cause almost $10 billion dollars in daily losses after blocking the Suez Canal.

Clearly, the global economy is vulnerable to supply chain disruptions. This is where AI steps in.

Using AI and large volumes of real-time data is a common theme in many areas of business. Since logistics has a direct impact on most of the global economy, the benefits brought on by using AI will benefit us all.

AI is everywhere – there’s no denying it. While humanoid-looking robots don’t walk among us (yet!), thinking machines accompany us everywhere. From the virtual assistants in our phones to AI-powered traffic management systems, intelligent computers are here to stay.