Personalisation is one of the most important current trends throughout various industries and especially throughout the online world. Firms such as Coca-Cola and Ferrero offer their products with customer’s name on it and even the customers themselves follow and take part in this trend. They personalize their breakfast (mymuesli.de), t-shirts (rushordertees.com) and shoes, which drove our focus on the German sport and lifestyle brand Adidas. 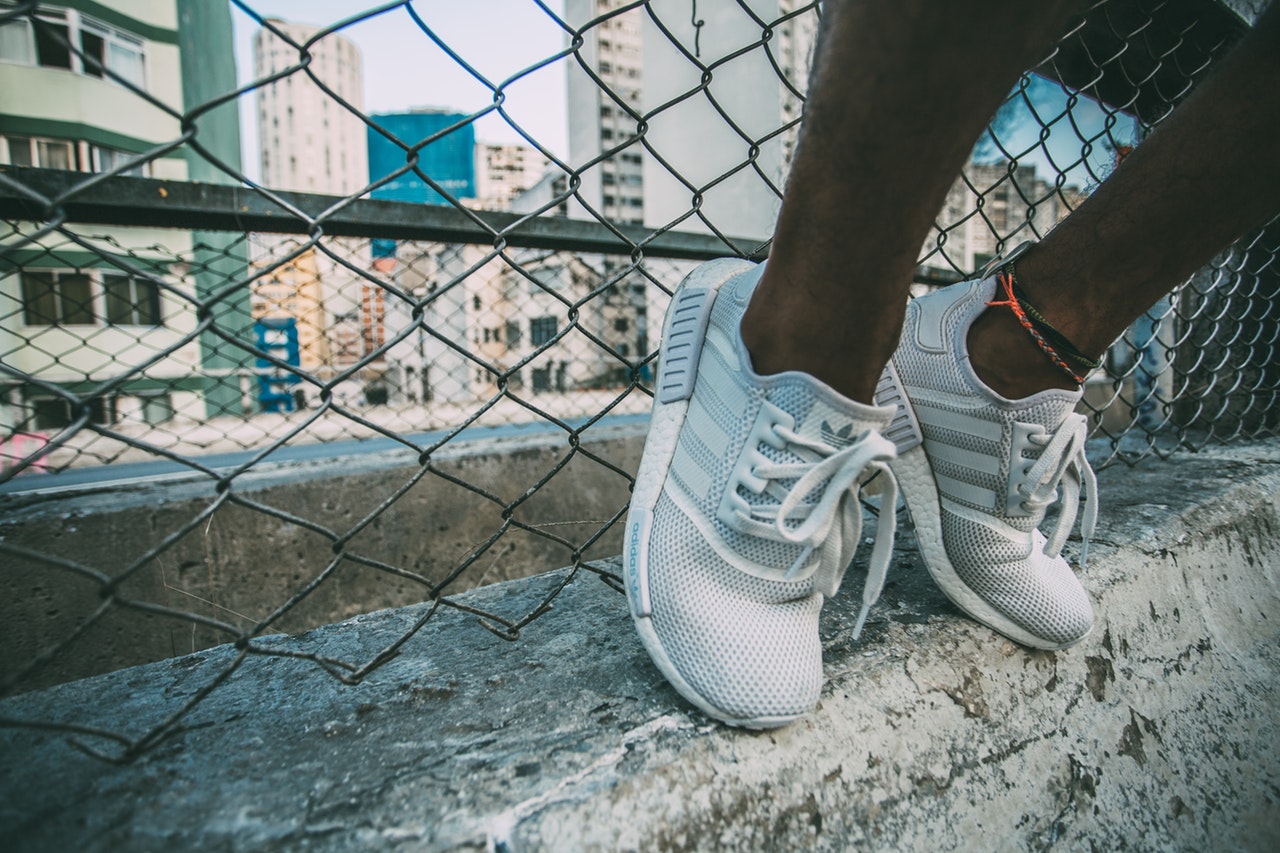 On adidas.com you can personalize your own sport and sneaker shoes to create a unique product, perfectly tailored to your specific needs and preferences. Several research papers have shown that an involvement of the customer in the production process intensifies his relationship with the brand and should finally result in a higher customer satisfaction.

Accordingly we assumed that a higher degree of personalization will result in a higher customer satisfaction. Following that logic, we observed the characteristics of Adidas’ online buzz and compared it to those of “Myadidas”, the label under which Adidas brands its customized products.

Setting up the Sample

After having decided on our research question, we needed to find a way to collect all relevant data. Since Adidas is one of the most recognized brands worldwide and its products represent a significant contribution to customer’s lifestyle we expected a huge number of mentions and wanted to narrow this number down as much as possible.

Therefore, we decided to analyze the online buzz for only one month (from 10.03.2018 to 8.04.2018). To avoid analyzing comparison posts with other brands, we excluded with Puma and Nike, the two most relevant competitors for the samples of Adidas and Myadidas.

For the Adidas sample we included all possible combinations of the terms Adidas, shoe and sneaker.

The same logic was applied to the Myadidas sample. Here, we included combination of the terms Adidas, custom, shoe and sneaker.

Finally, we excluded the term Myadidas from the Adidas sample to avoid double counting. Applying these settings left us with more than 45.000 mentions for Adidas and roughly 700 for Myadidas. Due to the fact that Myadidas only represents a small percentage of Adidas overall turnover, we assumed these outcomes to be highly realistic. However, a sentiment comparison with such a high discrepancy in mentions would result in distorted outcomes…

Hence, we created a random sample for Adidas and ended up with having about 700 mentions that could be used for a comparison to Myadidas.

Last but not least, we randomly checked the Adidas sample and the Myadidas mentions for their relevance of our research question and concluded that we were ready to start a well- founded comparison of the two samples.

By looking at the source pie chart, we discovered that Myadidas generated its buzz nearly only on Instagram, while the buzz for Adidas was more equally distributed among Instagram, portals and forums.

Since Myadidas customers individualize their products, Instagram seems like the perfect channel to publish their latest creations to their followers all over the world. In comparison, the buzz for standardized Adidas shoes and sneakers is more widely distributed, since articles written about these products are more likely to spread around different channels. Nonetheless, Instagram remains also for Adidas the most important source, mainly because customers tend to show their satisfaction with their latest purchases.

The different channel distribution of the two samples can furthermore explain the trend curve in the mentions in time.

Looking at the two graphs, we see that the curve for Myadidas shows several jumps, resulting in extreme peaks. Influencers have a great impact on this curve, since they reach a huge amount of followers with their individual creations, resulting in those peaks.

On the other hand, the curve for standardized Adidas shoes and sneakers seems to be more robust to short term fluctuations. This can be attributed to the fact that those products are perceived as more related to the overall brand of Adidas than the personalized products. Following that logic, Adidas’s brand image is able to stabilize the curve for the standardized shoes and sneakers. 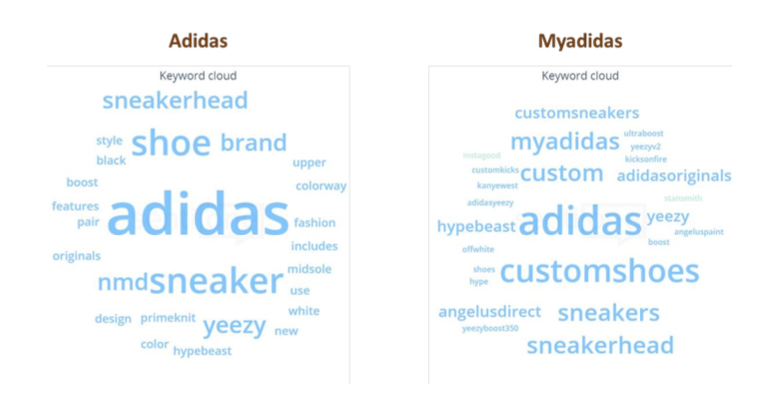 The individualistic aspect of Myadidas becomes fully evident through the keyword cloud*. The word “custom” is closely connected to Myadidas. Moreover, some influencers as “angelusdirect” with their own creations seem to have a strong connection to Myadidas. The individualistic keyword cloud allows Myadidas to specifically target customers and communicate to them in a more passionate and intimidate way. Focusing on the keyword cloud of Adidas, general fashion terms as color, new, design and more dominate the cloud. In contrary to Myadidas, nothing related to personalization appears. From this separation we can follow, that customers clearly distinguish between the brand Adidas itself and the sub-brand “Myadidas”. This distinguishing is crucial for avoiding cannibalization effects of the sub-brand on the main brand. Following the two completly different keyword clouds, an implementation of two different online marketing strategies for standard and custom products by Adidas seems highly likely.

In addition to the keyword cloud the comparison by sex delivers useful information for the branding of Adidas and Myadidas. Standardised Adidas shoes and sneakers generate nearly equal buzz for man and women. Interestingly Myadidas, as a brand offering customized products, is able to generate significant more buzz for male than for female customers (70,63% of the buzz is generated by male customers). This is especially astonishing since men in general seem not to be heavily connected to fashion or fashion products. A possible reason for this finding might be the possibility to personalize sport shoes with Myadidas. Influenced by successful top-athletes, who personalize their shoes with their number, name or other items, male customer may follow their idols and create their own unique shoes. This explanation is in line with the high impact of influencers on the Myadidas curve in the mentions in time chart. 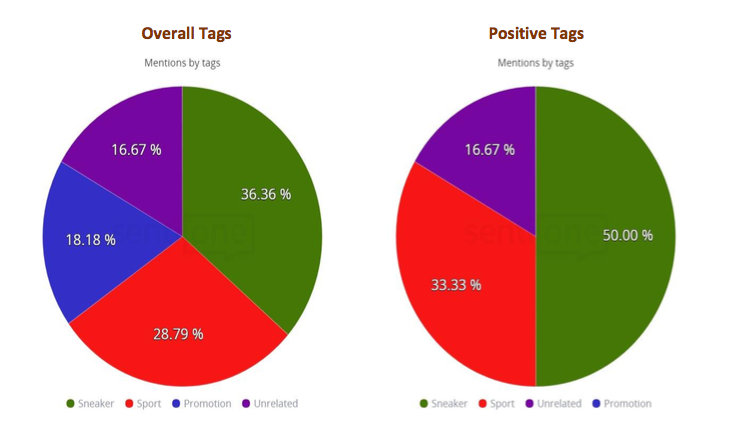 In order to get more insights on Myadidas, we decided to browse the mentions again and think about relevant tags.

After browsing through approximate 100 posts per sample, we decided on the following tags: Sneaker, Sport, Promotion and Unrelated – to form a basis for a qualitative, in depth analysis.

We classified all shoes as sneakers who were not put into the sport shoe tag, and logically the remaining shoes as belonging to the Sport category. Furthermore, we classified posts, which dealt with online shops, discounts, and give-away as Promotion. In the Unrelated category we put remaining posts, which did not really fit into one of the three other categories, or which were not related to Adidas or Myadidas at all.

After finishing the tagging it became clear, that for Myadidas the categories Sneaker, Sport and Promotional together with Unrelated had a nearly equal share in all mentions. However, after setting the filter to positive, a different picture emerged… The tags Sneaker and Sport were able to increase their share, while no post classified as Promotion was perceived as positive. Accordingly, posts that have a closer fit with the brand are perceived as more positive by customers. The higher relevance of these posts to the customers may be one underlying reason for this phenomenon.

Customer’s Sentiment of Adidas and Myadidas 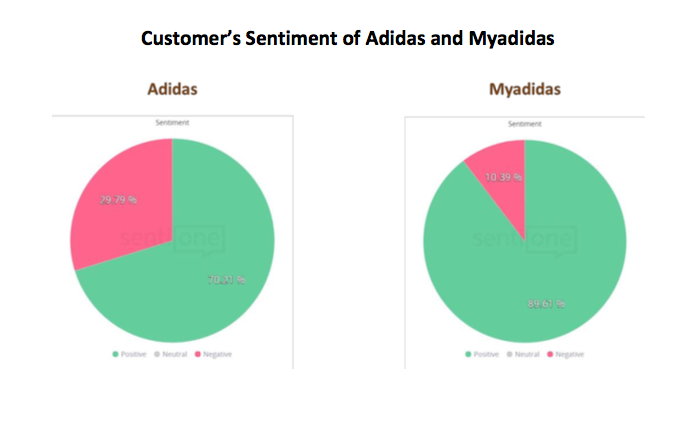 After analyzing and understanding the online behavior of Adidas and Myadidas customers in detail, we are still left with our firstly stated research question. By excluding neutral posts form this analysis we were able to analyze only posts which stated a clear opinion on the brand. From the two pie charts we can clearly see that positive posts overwhelm the negative ones. Therefore, Adidas was able to build an overall positive brand image for the core brand as well as for its sub-brand Myadidas. Moreover, the sentiment for Myadidas strongly outperforms the one for Adidas (89.61% vs. 70.21%). It seems that the personalization aspect, which is connected to Myadidas, enabled a more individualistic and intimate two way communication. Adidas successfully implemented this communication for its sub-brand Myadidas.

We also filtered the two pie charts to only include the most important sources. We picked these sources in such a way, that they represented roughly 90% of the overall online traffic of the two samples. Accordingly this meant that we included Instagram, Forums and Portals for Adidas and Instagram for Myadidas in the following analysis.

For Adidas the personalization approach clearly increased customer satisfaction. The opportunity to customize shoes and therefore the involvement in the production process intensifies the customer-brand relationship and results in satisfied customers. While generally male customers seem to show some reluctance to fashion, this is clearly not the case for Adidas. Male customers love the brand and the opportunity to personalize their sport shoes and sneakers. Moreover, the relevance of the posts directly influenced customer satisfaction.

However, the findings may only be applicable to the sport and fashion industry, where the products are perceived as lifestyle accessories by customers and may not hold true for products that generally show a lower level of involvement, such as food products of the daily life.

Moreover, the outcome of our analysis is heavily influenced by the accuracy of the used sentiment detecting algorithm. SentiOne has a 75-80% precision when detecting emotional background of online mentions. It is a self-developed algorithm taking into account not only the determined sentiment points of the words identified by the internationally acknowledged PANAS scale, but also the context and the linguistic features. Even though when conducting qualitative analysis it is always possible to manually recode the identified sentiments within the system, given that we opt for a 100% precision rate.

Therefore, we needed to manually exclude or reclassify some posts which were classified wrongly by the algorithm. Nevertheless, by analyzing such a high number of mentions we believe that the misses of the algorithm are balanced out through the sample and do not influence the underlying result significantly.